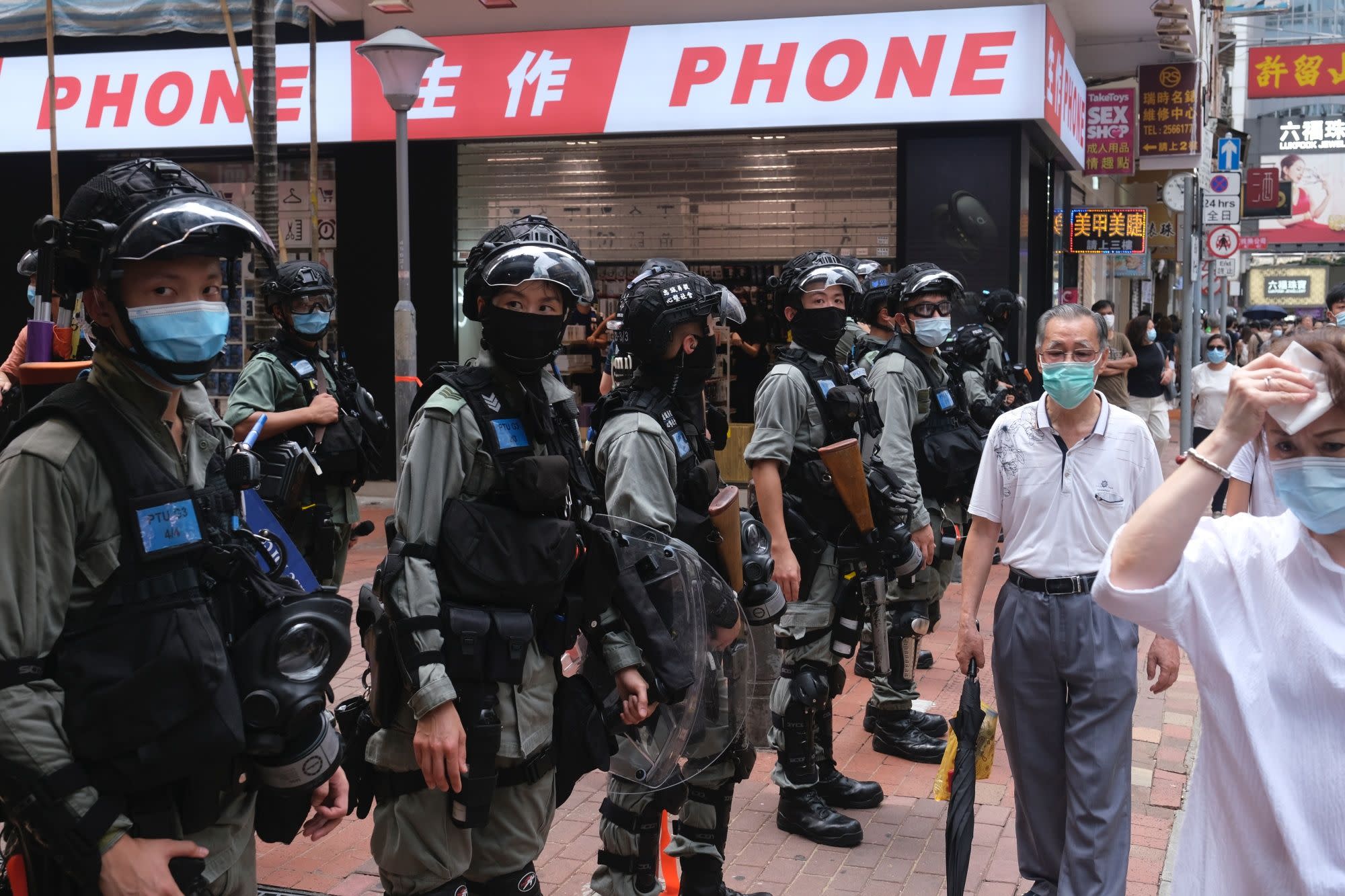 (Bloomberg) — Donald Trump ordered an end to Hong Kong’s special status with the U.S. and signed legislation that would sanction Chinese officials responsible for cracking down on political dissent in the city, drawing a rebuke from China and adding fresh uncertainty for businesses including banks in the financial hub.

“No administration has been tougher on China than this administration,” the U.S. president said Tuesday, announcing the two moves in the White House Rose Garden. Trump also said he had no plans to speak with President Xi Jinping, deviating from his pattern of criticizing Beijing while tempering it with warmth and respect for the Chinese leader.

Trump had threatened to take action ever since Chinese officials imposed the sweeping national security law on Hong Kong about two weeks ago. China’s implementation of the law, and the reaction of major trading partners who have criticized it, could have a substantial impact on a Hong Kong economy already battered by months of historic anti-government protests and coronavirus restrictions.

On Wednesday, China vowed to take strong countermeasures and sanction U.S. officials and entities over the Hong Kong law, without elaborating. It urged the U.S. to “correct its wrongdoings” and to stop interfering in Hong Kong affairs.

“If the U.S. continues such action, China will resolutely take countermeasures,” the Foreign Ministry said in a statement. “To safeguard China’s legitimate interests, we will take necessary measures and impose sanctions on relevant individuals and entities from the U.S.”

Under the law, banks are granted a kind of year-long grace period to stop doing business with entities and individuals the State Department determines to be “primary offenders” when it comes to undermining Hong Kong’s autonomy. Neither Trump nor his administration specified which Chinese officials might be sanctioned.

After that period, the Treasury Department can impose a variety of penalties on those institutions, including barring top executives from entering the U.S. and restricting the ability to engage in U.S. dollar-denominated transactions, according to Pat Toomey, a Pennsylvania Republican who co-sponsored the legislation.

“These measures, alongside Beijing’s own crackdown, place Hong Kong at the very front lines of the increasing tensions between the U.S. and China,” said Antony Dapiran, a Hong Kong-based lawyer and author of “City on Fire: The Fight for Hong Kong.”

Equities in Hong Kong slipped on Wednesday morning, with the benchmark Hang Seng Index losing 0.5% to head for the lowest close since July 2. Chinese technology firms led the losses, along with Hong Kong property developers. Shares on the mainland fell for a second session.

Prominent pro-establishment Hong Kong lawmaker Regina Ip pushed back against Trump’s measures, saying they would “only end up diminishing U.S. influence” in the city.

“It will only drive more Hong Kong people to rely more and more on mainland China for support for our prosperity and stability,” Ip, a member of leader Carrie Lam’s advisory Executive Council, said in an interview with Bloomberg. “This will not really effect the foundations of Hong Kong’s success as an international financial center, because the financial measures will only be imposed on individuals and entities identified under the act — it’s not as sweeping as some have suggested.”

Under the United States-Hong Kong Policy Act of 1992, the U.S. treats Hong Kong, a semi-autonomous part of China with its own legal and economic system, differently than the Chinese mainland in trade, commerce and other areas. An executive order released later revoked several of those provisions, including that would effectively treat Hong Kong the same as the mainland:

But neither the president nor the White House offered specifics about how his order would affect certain major sectors, such as Hong Kong’s financial industry. Trump decided against a more extreme measure to undermine the Hong Kong dollar’s peg to the greenback, according to a person familiar with the matter.

The U.S. has led foreign governments in criticizing the national security legislation, enacted by China just before the July 1 anniversary of the city’s return from British rule. Fears have since grown about how the law will be interpreted by authorities on the ground: People found guilty under the law could, in some cases, face life imprisonment.

Trump highlighted China’s controversial law in a letter to House Speaker Nancy Pelosi and Vice President Mike Pence attached to a copy of the order and posted by the White House. He wrote that sanctions would target anyone involved directly or indirectly “in the coercing, arresting, detaining, or imprisoning of individuals” under the security law, or anyone found to have been responsible for or involved in developing or implementing it.

Trump approved the legislation on Tuesday after spending weeks blaming Beijing for the coronavirus pandemic and criticizing its handling of Hong Kong and treatment of minority groups in western China. The president has faced widespread criticism over his response to the virus, with cases once again surging as businesses reopen.

Trump on Tuesday also veered into a winding attack on his Democratic opponent, Joe Biden, portraying him as having been cozy with China during his time as vice president. He went on to blast Biden on everything from climate policy to criminal justice and immigration — delivering a predominantly political speech from a podium traditionally reserved for policy.

Still, Trump on Monday said the trade deal reached earlier this year was still “intact” because China was purchasing the promised agricultural products. But Trump also expressed frustration with the country over the spread of the coronavirus, which originated in Wuhan.

The “phase one” pact, which took effect in mid-February and has become a cornerstone of his re-election campaign, is falling short on a number of fronts, including Beijing’s promises of large agriculture and energy purchases. The Trump administration so far has been hesitant to ramp up the pressure or back away from the deal altogether, even as the rhetoric on both sides heats up.

The U.S. legislation would require the State Department to report to Congress every year about officials who seek to undermine the “one country, two systems” model that applies to the special administrative region. It also gives the president the power to seize the assets of and block entry to the U.S. for those individuals.

Trump last month also signed legislation aimed at punishing Chinese officials for oppression of Uighurs and members of other Muslim minority groups. The tougher stance toward Beijing represents a pivot for Trump, who largely avoided human rights-related interventions as he was negotiating the first phase of his trade deal.

“What they did to the world should not be forgotten,” Trump said.

For more articles like this, please visit us at bloomberg.com