The U.S. Needs to Make India a Bigger Trade Partner 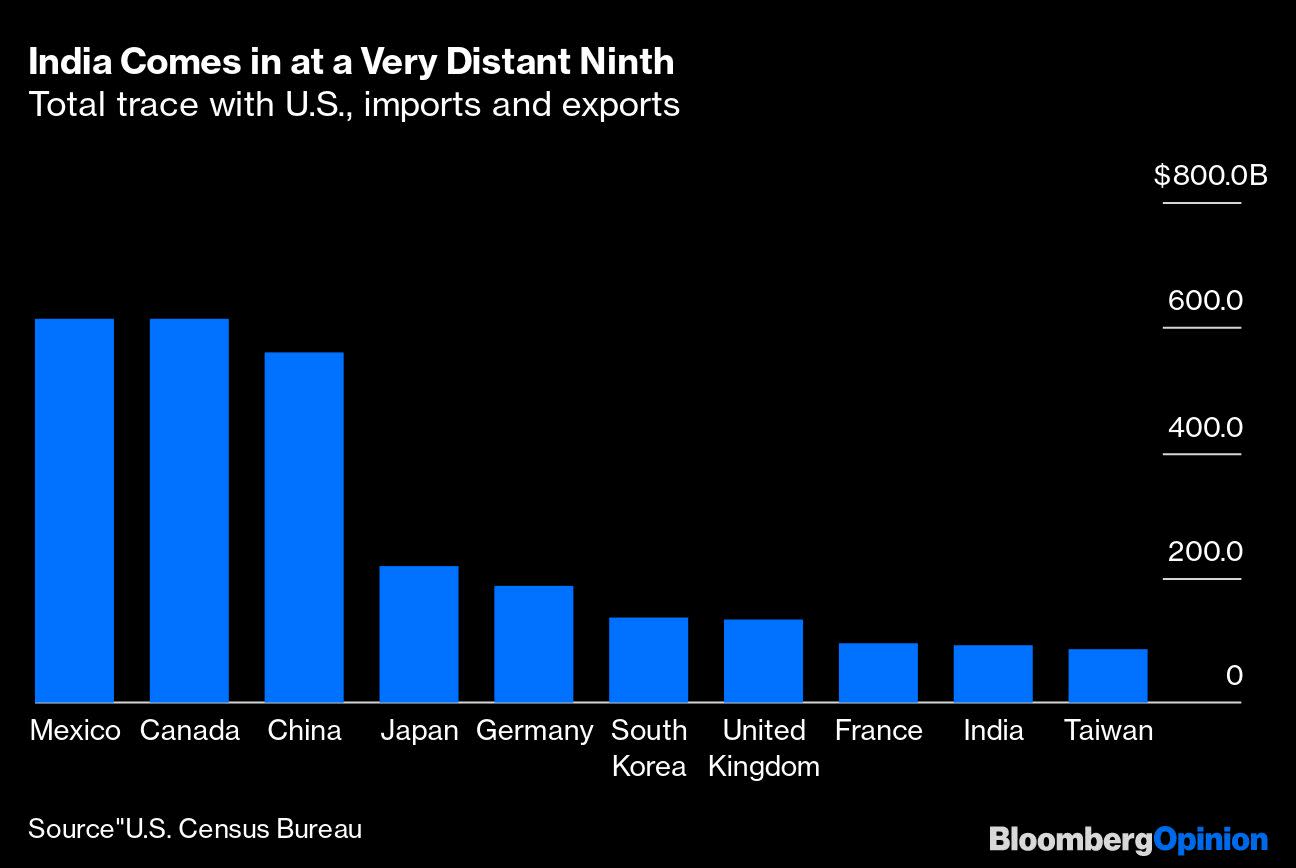 (Bloomberg Opinion) — Conflict between China and India has made it urgently necessary for the U.S. to deepen its economic integration with the latter country, through increased trade and investment. On June 15, 20 Indian soldiers and an unknown number of Chinese soldiers were killed when the two countries clashed over a disputed border. In response, India banned a number of Chinese apps. As my Bloomberg Opinion colleague Mihir Sharma points out, these conflicts are likely to drive India closer to the U.S. in strategic terms.

But that budding alliance will be harder to cement without deeper economic ties. Not only does trade tend to cement alliances, but building up allied countries’ economies makes them much more able to resist military encroachments by rivals. The U.S. once understood this; the Marshall Plan famously helped stabilize Western Europe after World War II and prevent it from falling into the Soviet orbit, while opening U.S. markets to Japanese, South Korean and Taiwanese products helped those countries industrialize.

In recent years the U.S. seems to have forgotten this lesson. Opposition to the Trans-Pacific Partnership largely ignored the geopolitical importance of that treaty, which would have created an Asian trade bloc to rival China. Now, with the U.S.-China rivalry heating up, let’s hope the U.S. will remember the importance of trade and investment as tools for cementing alliances. And the most important ally will almost certainly be India.

Deepening the economic partnership with India will be a long and difficult road. India now is only the U.S.’s ninth most important trading partner, barely ahead of tiny Taiwan:

A trade deal between the two countries could boost this number. But even a minor agreement fell through earlier this year. True to form, the Trump administration has been refusing to allow India duty-free access to U.S. markets unless India opens its agricultural sector to U.S. exports. Because India is still a largely rural, agrarian economy, demanding that the country put hundreds of millions of poor farmers at risk of being displaced by U.S. agribusiness was always a non-starter.

A future administration should be more sensitive to India’s needs and vulnerabilities. Opening U.S. markets to Indian-made goods, even with no reciprocal opening by India, makes geopolitical sense. Having the U.S. as a stable source of demand for manufactured products would also help India to build up its industrial sector in the same way that China and South Korea did. And it would be unlikely to increase the trade deficit or put U.S. workers out of a job; instead, it would result in some companies shifting labor-intensive manufacturing out of China into India, as is now happening with Vietnam.

An even more beneficial economic relationship, however, would be increased direct investment by the U.S. into India. China famously bolstered its economy by relying heavily on foreign direct investment — as the workshop of the world, it invited companies from all over the globe to build factories in its special economic zones.

Nor is China’s experience unique; economists have found that FDI, especially in manufacturing, tends to boost growth. In addition to providing capital for new buildings and machines, FDI is a way of transferring technology between countries. When U.S. companies build a factory or other facility in a developing country, they show the locals how advanced machinery, production processes and other technologies work. Those locals can then go start their own companies, making use of what they learned and raising productivity in the domestic economy. In the long run, technology is what makes a country rich, and because learning technologies from developed nations is much cheaper than reinventing them, tech transfers are a good way to help a country develop quickly.

India has long been faulted for lagging behind China when it came to FDI, especially in manufacturing. But things may be changing, as China becomes more insular and India makes an attempt to open up:

The U.S. is already one of the largest direct investors in India (it’s hard to know because most Indian FDI comes in through tax havens). But joint efforts to boost bilateral investment would pay off both for India, and for the U.S. investors who reap the returns.

Increasing U.S.-India FDI would yield multiple benefits. In addition to making both countries money and aligning the interests of the two nations even further, making India a richer, more advanced and more powerful country would strengthen it as a bulwark against Chinese domination of Asia. India is already taking various steps to try to attract more U.S. direct investment; now the U.S. needs to do its part. Tax breaks and other incentives for U.S. companies to invest in India could help grow and solidify this crucial 21st-century partnership.

This column does not necessarily reflect the opinion of the editorial board or Bloomberg LP and its owners.

Noah Smith is a Bloomberg Opinion columnist. He was an assistant professor of finance at Stony Brook University, and he blogs at Noahpinion.

For more articles like this, please visit us at bloomberg.com/opinion