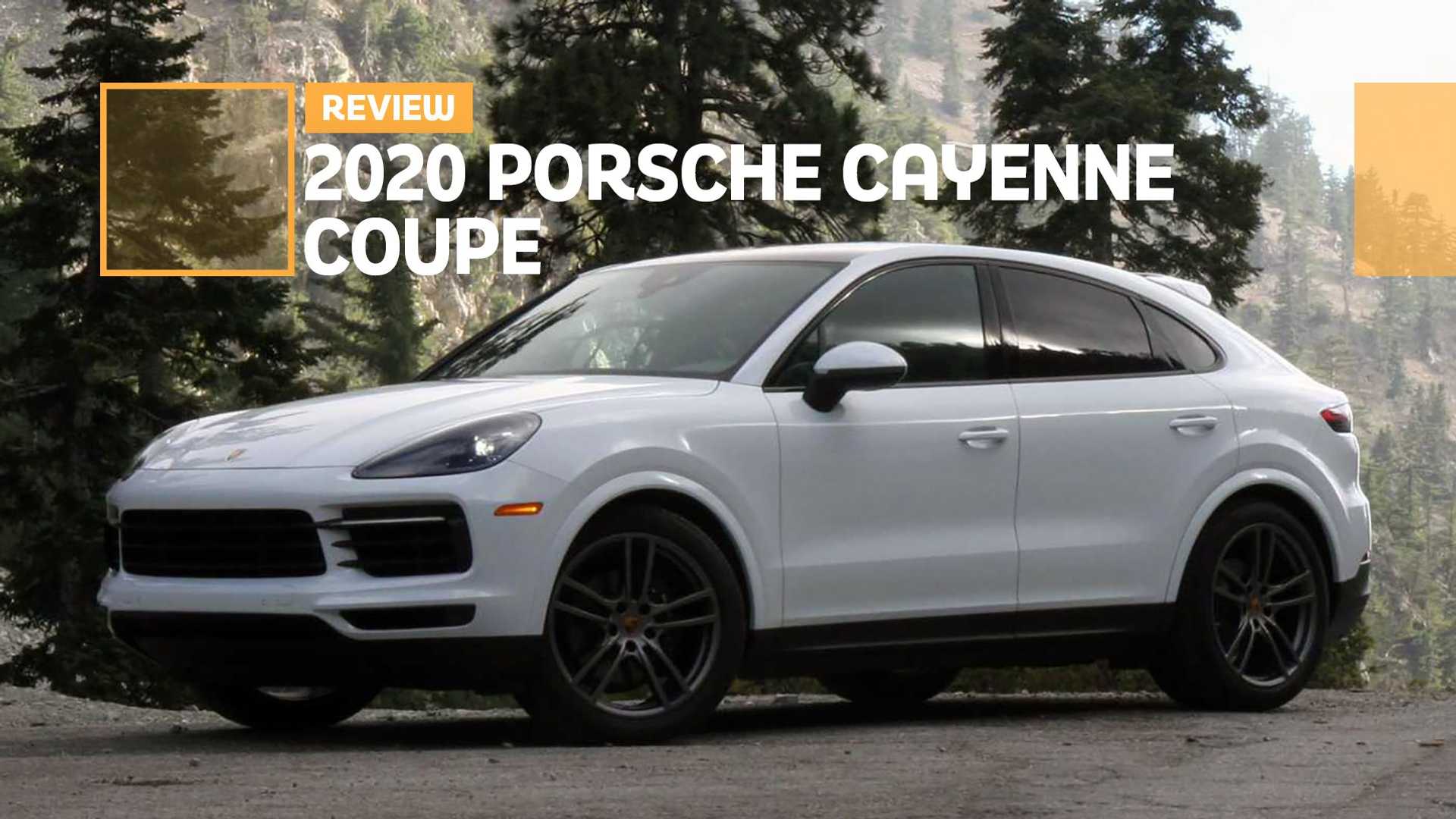 Four decades ago, if you had some expendable income and wanted to show off, you bought a personal luxury coupe. That loaded Chevrolet Monte Carlo, Ford Thunderbird, or Chrysler Cordoba showed the world that you valued style over practicality, and you were monied enough to make such a decision. Times have changed, but the word to describe such a vehicle hasn’t. Enter the 2020 Porsche Cayenne Coupe.

We could argue the semantics of calling any four-door offering – let alone a crossover – a coupe, but instead, let’s just evaluate the fastback Cayenne for what it is. To do that, Porsche offered us a stylishly appointed base model, which features a turbocharged 3.0-liter V6 making 335 horsepower and 332 pound-feet. With a starting price of $75,300, the Cayenne Coupe demands an additional $9,000 relative to the regular SUV, though it does include standard niceties like a panoramic glass roof, eight-way power sport seats, and the Sport Chrono Package.

For more on how Motor1.com rates cars, click here.

Somewhat unsurprisingly, the Cayenne Coupe’s strongest area is its design. In our subjective opinion, this fastback SUV looks better than rivals like the BMW X6 and Mercedes-Benz GLE Coupe, and we think it improves on the traditional Cayenne too. The roofline is lower by 0.8-inch, and its shape imitates the legendary 911 – peep that D-pillar treatment and tell us you can’t see the resemblance. Overall, the coupe treatment makes the Cayenne look longer, an optical illusion that nonetheless imparts Porsche’s SUV with much nicer proportions. Suddenly, the Cayenne’s short hood and long front overhang appear much more cohesive. Thanks, Coupe.

From the A-pillar forward, the fastback Cayenne is identical to its traditional sibling. Designers reshaped every other body panel, however, giving the Coupe a more athletic feel. Our tester wore 21-inch Cayenne Turbo wheels, which conspire with a 0.7-inch-wider rear track for a planted, sporty stance. That rear track drapes over a sleeker bum on the Coupe – the license plate mount is now on the rear bumper instead of the tailgate, and a fixed rear window spoiler joins an adaptive wing on the trailing edge of the hatch for improved aerodynamics.

The lower roofline has an unfortunate effect on outward visibility, but otherwise, the cabin feels very familiar, with generally nice materials and a modern design. Our base-model Cayenne featured the standard eight-way power seats, the interior draped in buttery-soft Slate Grey leather ($3,750). As in the 911 Cabriolet we recently tested, Porsche’s monochrome interior is uncommonly attractive. However, there’s a bit too much cheap-feeling “piano black” trim for our liking.

Late-model Porsches do a masterful job of managing ride quality over poor surfaces, and the Cayenne Coupe is no exception. Even with summer tires (and rubber-band sidewalls), the crossover provides sumptuous bump absorption on virtually all road surfaces. Credit goes to our tester’s optional adaptive air suspension ($2,170), joining the Porsche Active Suspension Management that comes standard on every Cayenne Coupe. One pimpled stretch of Los Angeles asphalt sent shudders and reverberations through the cabin, but we’ve yet to encounter a vehicle that didn’t suffer the same fate on that road.

Even the standard bucket front seats of our tester are comfortable and supportive, limiting driver and front passenger fatigue on long journeys. However, our unusually spec’d Cayenne Coupe boasted a heated steering wheel, but non-heated seats. We’d have appreciated the latter more, given this summer’s unseasonably chilly and foggy mornings.

Comfort in the back seat is something of a mixed bag. Porsche lowered it slightly to preserve headroom while allowing for that sleek roofline, offering either standard bucket seats or a no-cost two-plus-one bench. Our tester had the latter, and it’s supportive and surprisingly spacious. However, claustrophobia sets in on even short journeys thanks to narrower rear windows and a beltline that now sits above the passenger’s shoulder – that’s the cost of looking good, we suppose. The standard glass roof provides rear-seat occupants with a lovely view of the sky above, alleviating cabin fever somewhat.

The newest iteration of Porsche Communication Management is reasonably easy to use, offering a good mix of touchscreen and physical controls, including a few redundant functions on the steering wheel. Wireless smartphone mirroring comes standard, though as with other versions of this tech, it occasionally dropped the connection. We prefer wired Apple CarPlay for that reason.

The Cayenne Coupe comes standard with Porsche Advanced Cockpit, comprising an analog tachometer flanked by two 7.0-inch high-definition displays that are reasonably reconfigurable – a map, engine vitals, an analog-style speedometer, and audio information are on the menu. Paired with the PCM’s 12.3-inch infotainment screen, Porsche Advanced Cockpit provides the driver with plenty of information, although switching between the screen displays is a bit distracting.

The standard audio system left us wanting, however, with muddy lows and unpleasant highs coming through the standard speakers. No amount of fiddling with the stereo’s equalizer or balance/fade could rectify the problem. The casual listener might not notice, but anyone with even a slight bent for music and audio will want to option the $1,200 Bose or $7,000 Burmester systems, both of which offer a better experience commensurate with their prices.

The Porsche Cayenne is a solid SUV in terms of performance and handling, acquitting itself in regular traffic as one might expect of any Porsche. The Coupe is no different, offering direct steering and limited body roll, even with PASM in its least sporty Normal setting. The Coupe is actually heavier than the regular SUV (4,663 pounds versus 4,581), likely because of its standard glass roof. A carbon roof is optional, but even without it, the extra weight isn’t noticeable in any public-road driving situation.

Letting the Cayenne Coupe down is its base powertrain. Although 335 hp and 332 lb-ft are good enough for swift stoplight drags and passing maneuvers – Porsche says to expect a zero-to-60-mph time of 5.7 seconds, which is a tenth slower than the standard Cayenne with the Sport Chrono pack – the engine is soulless in its operation. As the tach needle swings its way up to 6,500 rpm, the Cayenne gathers momentum accompanied by a diesel-like racket that inspires zero passion. As usual, we strongly suggest ticking the box for the $3,220 Sport Exhaust, which gives the V6 some added presence.

Aside from the agricultural clatter coming from the hood (Porsche did build tractors for a time, so we’ll just call it heritage), the Cayenne is a pleasant back-road companion. The transmission is more than willing to kick down on hard braking, holding lower ratios in corners to preserve handling balance. Porsche is one of the best at imbuing electric power steering with genuine road feel, and with the drive selector set to Sport or Sport Plus, the suspension and helm firm up nicely. Turn-in is excellent and weighting behind the wheel is nearly perfect, with the front wheels yielding to slight understeer at higher-than-advisable speeds.

Our Cayenne Coupe came pretty light on options, with no driver-assist technology to speak of. Every 2020 Cayenne model comes with automatic emergency braking, pedestrian detection, and front and rear parking sensors; meanwhile blind-spot monitoring, lane-keep assistance, and adaptive cruise control are optional. In a world where economy cars and minivans offer those features standard, it’s surprising that Porsche isn’t following suit. Why most luxury manufacturers insist on charging extra for such technology we’ll never know.

And although the Cayenne features base-X6 power, it’s priced closer to the X6 M50i, which seems to us like a lot more “coupe” for the money. Ditto the GLE 53, whose powertrain is much smoother and more soulful than the Cayenne’s entry-level V6.

Working in the Porsche’s favor are faultless interior fit and finish, a more mature design, and excellent chassis dynamics. But 87 large is still a tough pill to swallow, particularly since buyers of base-model Porsche SUVs are typically less concerned with sporty driving and more invested in comfort and convenience. Devotees of performance would be better served with a Cayenne S or GTS Coupe, and those looking for luxurious, coupe-like transportation might get more for their cash elsewhere. That said, for some, that gold Stuttgart badge is priceless, and the Cayenne Coupe is a definite looker.