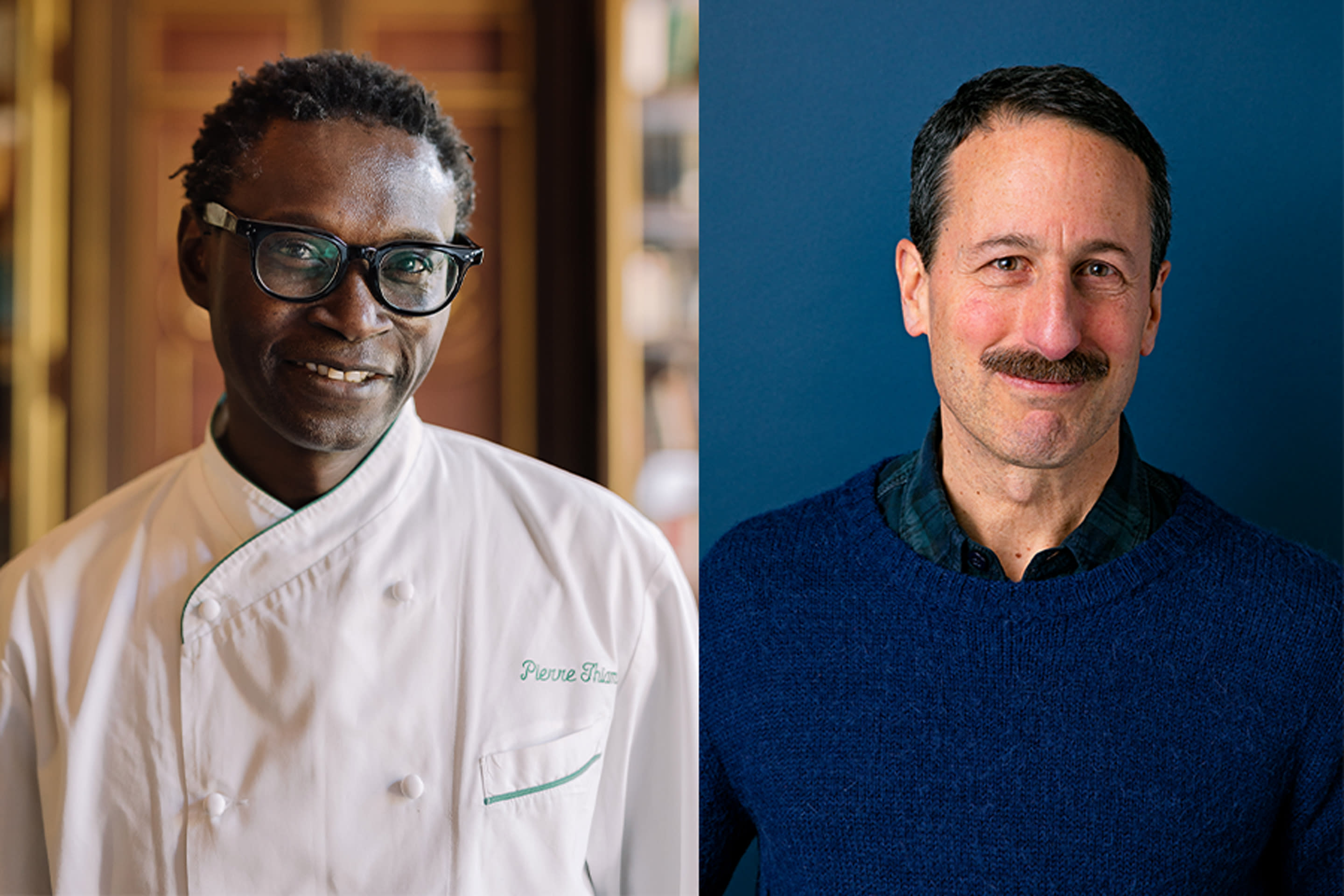 While on a walk in 2015 around Brooklyn’s Clinton Hill neighborhood, Teverow saw a man cooking a whole animal on the sidewalk and had one overriding thought: I have to go talk to him.

It was Pierre Thiam, one of the world’s leading West African chefs.

“It was a lamb, and I was humiliated because I assumed it was a baby pig,” Teverow told Fortune. (A pig would not have passed muster in Senegal, Thiam’s birthplace, which is a predominantly Muslim country.)

The pair would occasionally cross paths after that initial meeting, and Teverow had ordered Thiam’s first cookbook: “Yolélé! Recipes From the Heart of Senegal.” (Yolélé is a Fulani expression used throughout West Africa that’s meant to be shouted in joy. It roughly translates to, “Let the good times roll!”)

But a partnership wasn’t born until Teverow read an article about Thiam’s dream: creating economic opportunity for West African farming communities by sharing their food with the world, including the ancient grain fonio, pronounced “phone-yo.”

Two years after their sidewalk meeting in 2015, the pair launched their company, aptly named Yolélé. “I had been making my living in the specialty food industry for 16 to 17 years at that point, and I’d been looking for a way to make that work more meaningful than making fancy food for fancy people,” Teverow says.

Their signature product—a West African grain called fonio—is now sold nationally in Whole Foods and found in restaurants across the country. Teverow says they have seen online sales increase around 20% month over month since April. Their August Amazon sales so far are more than six times their sales for all of August 2019.

From May to April, Yolélé’s sales grew by over 600%. They began to receive more interest, and out of the 1,500 stores Yolélé will be sold in by 2021, 60% are new partnerships formed after May, underscoring a widespread wave of interest in Black-owned food business.

When he read about Thiam’s ambitions, Teverow knew that he could help—because he’d done it before. In the ’80s, Teverow worked as the director of product development for Dean & DeLuca, an upscale grocery known for its unique imports. The main part of Teverow’s job, he says, was identifying ingredients that are delicious but not well known in the U.S. to buy in bulk.

“When quinoa came across my desk, I thought, Well, here’s a grain. We sell plenty of grains. Absolutely. Let’s do it,” Teverow recalled. “I was surprised when it started selling really well from the beginning.”

But even he could not have predicted the fact that quinoa has become a virtual staple, now found everywhere from L.A. grain bowls to Midwestern grocery stores.

The same appeal quinoa had is present in fonio: It’s healthy and novel, and it gives foodies a chance to get more creative. Teverow said the process of getting it to the market is also not so different. To reach consumers, fonio needed to be placed not only into cutting-edge stores but also onto cutting-edge menus to raise awareness. And in that sense, the food entrepreneur learned a major lesson from quinoa.

“We sold small amounts of it for years until finally someone took quinoa and turned it into a grain-based food,” he explained. “Rather than selling grain, they turned it into pasta. That was the game changer.”

So Teverow and Thiam decided from the outset that variety—offering everything from curry to savory umami flavors—was the route they had to take if Yolélé was to have a national impact.

The duo got their first big break in the fall of 2017. Whole Foods was opening its first location in Harlem, and the company wanted to feature products produced by Black-owned businesses. The company gave Yolélé a chance, and Thiam says Whole Foods turned out to be the champion in its category.

“They realized that this had potential, and they offered a few other stores in New York City. And in each new store, we were doing great,” he says. “Whole Foods noticed what we’re doing, our story, and they insisted very early that we should launch nationally.”

Thiam always demoed their products in stores himself. Fonio has a delicate, slightly nutty flavor that people find unique, he says. In the summer, he would prepare a fonio salad with mango and parsley, herbs and lime, combining fresh summer flavors to entice grocery shoppers to try it.

While shoppers were often sold instantly, building a sustainable production system for fonio farmers in West Africa was a daunting challenge. Senegalese Thiam didn’t just want to share the ancient grain with the world, he wanted to make sure that the products also had an impact on the places they came from. The partners are currently in the process of building a new mill, in Thiam’s hometown of Dakar, which will be the anchor of their global supply chain.

Fonio grows in poor soil easily, Thiam says, but the challenge is the processing: Fonio has an inedible skin that must be removed. “To give you an example, for about 100 kilos of fonio, it would take close to two weeks to remove the skin. Fonio is almost the size of a grain of sand, so the process is tedious,” he says. “But with the state-of-the-art mill we are about to build, it will be three tons of fonio per hour.”

Their goal is to create a distribution network and economic opportunity for farming communities, which will hire thousands as the fonio moves through the processing cycle, Thiam says. The traditional cleaning process requires a lot of water, a constraint in some regions where resources are scarce, but the mill, scheduled to finish in early 2021, will require none.

“Many of those families will hire local youths at busy parts of the agricultural cycle, so that could be additional tens of thousands of seasonal jobs. Many more jobs will be created in transportation and aggregation,” Teverow says. “There will be industrial and clerical jobs in the processing facility and then competitors will replicate our setup, which should further multiply the economic impact.”

The quinoa case study also showed that there can be downsides to popularity, too. As awareness about quinoa skyrocketed, so did the price—and concern that global interest was hurting farmers in Peru, says Andrew Stevens, who holds a doctorate in agricultural and resource economics. In the Puno region of Peru, where the majority of the country’s quinoa is grown, consumption did drop slightly, but Stevens says this is a result of higher income leading to more purchasing options. The real concern, Stevens says, is the unintended consequences of creating a global supply chain.

“We can think about high-quality coffee, cacao, things that are small-landowner produced but marketed by large, multinational corporations,” he says. “There’s a question about sort of who owns what and who’s getting the money?”

Marc Bellemare and his colleagues Johanna Fajardo-Gonzalez and Seth Gitter published a paper on the welfare impacts of rising quinoa prices and also found little impact. While quinoa and fonio are not parallel situations, Bellemare said there is one principle to consider: Cochrane’s agricultural treadmill. The treadmill is the idea that after being introduced to new technology, farmers become dependent on each new innovation to stay competitive in the market. With quinoa now being grown in Colorado and the prices of quinoa back down to their pre-2010 levels as more quinoa floods the market, Bellemare says farmers in Peru have seen this for themselves.

“We were talking to some farmers in the highlands of Peru,” he says. “They were telling us things like, ‘I know prices are back down, but I’m just going to hold on to my grain because the prices are going to spike back up again.’ But those old levels of profits are gone.”

Bellemare says it’s hard to determine if fonio will be the next quinoa—but it really will depend on whether chefs and foodies embrace it.

“We went into restaurants with a bag of fonio and asked to talk with the chef. After Whole Foods, restaurants were really our first customers,” Teverow says.

The partners looked to tastemakers like Filipino chef Woldy Reyes, who runs catering company Woldy Kusina in Brooklyn, and Sabrina De Sousa and Alissa Wagner, the minds behind the NYC restaurant and market Dimes.

“Most people find it forbidden to encounter an ingredient that they’ve never cooked before, but if a great chef cooks it for them and it gets buzz, it becomes cool,” he says.

When Thiam approached Mawa McQueen, a restaurant owner in Aspen, about incorporating fonio into her menu, the memories came back. “I show it to my brother. I was like, ‘Oh, my God. We used to hate this.’ It was like the poor man food,” McQueen says, laughing. “But it has so many good things for your health, I said, you know what? I’m going to introduce this in Aspen.”

It also helped that McQueen was sick and tired of quinoa. Aspen is the worst place to introduce anything ethnic, she says, but because people knew her she was able to take the risk. Anything on her menu with quinoa was replaced with fonio, much more gentle on the stomach and easier to digest, she says.

The first week, the guests complained.

“People would ask, ‘Can I have quinoa?’ I would go out and say, ‘You eat this,’” McQueen says, laughing.

Now, no one asks for quinoa at all. Some guests even stop by Mawa’s Kitchen to buy fonio to cook themselves. She offers a gluten-free pancake, porridge, and a fonio and arugula salad, and the only time guests complain now is if the fonio runs out.

Indeed, Thiam is confident that fonio will one day be just as popular—if not bigger—than quinoa. During Thiam’s TED Talk with over 1 million views, he asked the audience to imagine the African grain just as popular as the European grains we consume today.

“Fonio touted on the levels of cereals, breads, nutrition bars, cookies, pastas, snacks—why not? It’s easier to say than quinoa.”

This story was originally featured on Fortune.com