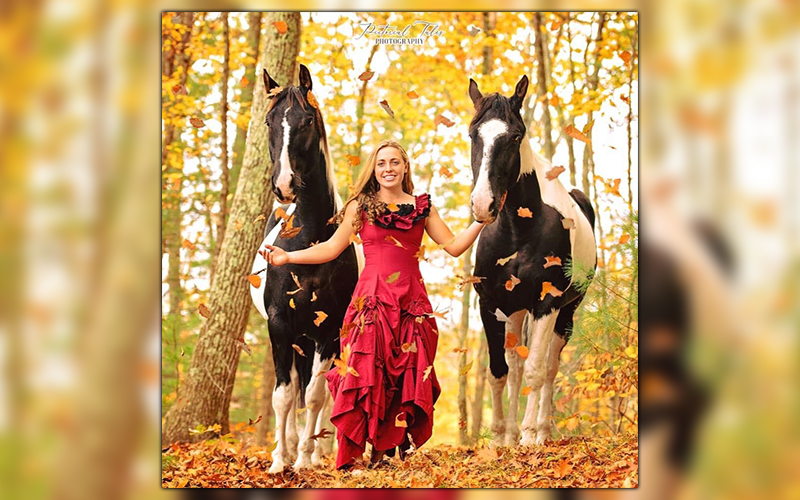 Kayleigh Hamel and her team of twin-brother oxen, Simon and Oliver, were a familiar sight around The Valley where she raised and trained them at the Neill farm, starting 10 years ago.

Fast forward almost a decade and Hamel is a horse clinician, working with people and horses to fix problematic behaviors through her business Braveheart Beasts. She works with people and animals in Massachusetts where she lives, but also travels throughout the country training and offering workshops.

She’s also a performer who will be at the Topsfield Fair in Topsfield, MA, October 1-11 with her two horses, Alkimus and Elgin for a freestyle performance where she will lead them through a series of tricks and dance-like movements using her voice, her body and her connection with them.

It was her work with Simon and Oliver and later a second pair of short-horn steers, Percy and Carter, along with a lot of work and training in between that led her to her current work.

Sadly, Oliver died on August 28 and Hamel brought him home to the Neill farm where he is buried on a sunny knoll where he used to spend time. He was 10 years old, which Hamel said was on the younger side of getting older.

“The amount of time I spent with them was beyond a pet/owner relationship. It was really a partnership,” she said.

The 2016 graduate of Harwood Union was able to work with John Jenkinson, West Berlin, who along with his own team of oxen, mentored her in training Simon and Oliver, but a lot of her work with her pair was trial and error, working to fix things as they went wrong.

“You fix the things that aren’t working by breaking down the problem into steps and fixing things step-by-step.  What helped me the most came from my endless hours with them on the farm, working with them and seeing what I could train them to do,” she explained.

Hamel grew up riding horses but stopped riding when she began to train Simon and Oliver when she was 12 years old. When she was 16, she started her own business working with Simon and Oliver and then expanded to horses, donkeys and mules. She spent her junior and senior year of high school attending the Randolph Technical and Career Center study agricultural technology.

After graduation, she moved to her mother’s farm in Montpelier and started a carriage business with a team of Percherons and also started working at Vermont Compost, training mammoth donkeys (over 14 hands high) to deliver organic eggs to Hunger Mountain Co-op for Carl Hammer via a donkey-drawn wagon.

“Training donkeys is a lot like training horses. For horses, they’re prey animals and their top priority is safety and relaxation. In training we adjust where they find rest and relaxation to get them to go through a specific sequence of behaviors so they’re rewarded with rest and relaxation afterwards. Donkeys want the same thing except they are slower and more deliberative in their decision-making. There was a lot of trial and error. A lot of my work involves taking feedback from the animal about what is working and what isn’t,” she explained.

She worked for Vermont Compost for two years, first spending six months training the donkeys and then driving the wagon 90 minutes each way from the farm to the co-op, breeding donkeys and managing an assistant trainer.

She traveled to Illinois to train in classical dressage for four months in the winter of 2018, working with Tempel Lippazon stallions before moving back to Massachusetts and continued to work with animals.

She began focusing on lessons and clinics working with animals and their owners. She also acquired two horses, one of whom she’d worked with for a client.

“He was my very first problem horse and he taught me most of what I know about horses. When I first started, he was very insecure and would lash out in dangerous ways. He’s one of my main performing horses now and I work with him doing Liberty work which means working with them freely on the ground while telling them what I want them to do and where I want them to go. I teach them how to move as if I were riding them,” she said.

That horse was not the best match for his first owner and he was offered to Hamel after she trained him. That is Alkimus. Her other horse, Elgin is younger and she also works and performs with him.

“I love everything about what I do, traveling around doing training workshops and performing. Performing is one of my biggest passions and an opportunity for me to show people the kind of work I do with horses,” she said.

She travels in a 50-foot camper/horse trailer pulled by a Chevy diesel Duramax 4500 truck.

Her performance is free-style featuring music and costumes and a theme. She creates a routine that depends on what horses she is working with, using Liberty-style cueing.

Prior to Oliver’s death on August 28, she’d been in Ohio for two months where she trained in Liberty work with Luke Gingerrich.

“He’s a Liberty trainer and does a lot of high-performance Liberty work which helped me refine what I’m doing with my horses,” she said.

Other than her dressage training and working with Gingerich, she is also self-taught and credits her work with Simon and Oliver as well as a natural ability to connect deeply with animals that have been with her since she was very young.

Here’s an excerpt from a post she wrote after she lost Oliver.

“With the help of some incredible people, I was able to bring his body back to the farm in Vermont where he was born and lived for most of his life, the place that started everything for me. We buried him on top of what used to be his favorite hill so that he can always overlook the farm and the mountains there. Burying him felt like burying a part of my soul and seeing the emotions from those who were with me when he was laid to rest let me know that I am not the only one who felt that way. He was, and still is, so loved.

“He is the first one of my animals that I have known from beginning to end, from birth and now to death. It’s a feeling I imagined many times before, but one I was still not prepared to feel. So much left with him — a friendship, a part of my childhood, the cornerstone of so many meaningful relationships that I would never have had if it wasn’t for him and his brother.

“I love you, buddy. Now go enjoy those greener pastures.”