This article was written exclusively for Investing.com

Many market participants believe is the world’s most political commodity. With over half the global reserves sitting in the Middle East under the control of OPEC and Russia, the international cartel, events in the turbulent region impacts traditional energy prices. Crude oil is a political commodity as the geopolitical landscape has driven the price higher and lower over the past decades. While the rise of US production diminished OPEC+’s role over the past years, the shift in energy policy under the Biden Administration is handing some of the pricing power back to the cartel.

Meanwhile, nutrition is a critical factor for sustaining life. is the primary ingredient in bread, an essential food product. Throughout history, wheat has been far more political than crude oil as rising prices and scarce supplies have toppled governments. When people go hungry, they blame their leaders.

The most recent example came in 2008 during the Arab Spring, which changed the political landscapes in North Africa and the Middle East. The political change which swept across the region began as a series of bread riots in Tunisia and Egypt, as the wheat price increased the price of the food product. Last week, the wheat price rose to its highest level since early 2013, which could have significant ramifications for governments worldwide.

Criticism of governments by their citizens dates back to the earliest times. While some forms of government tolerate criticism better than others, no government leader can keep all of its citizens happy. Revolutions and revolts occur for many reasons throughout history, but widespread hunger is one of the leading causes that topple regimes.

The economic hardship that led to the French Revolution is often characterized by a famous quote attributed to Marie-Antoinette, the Queen of France, during the revolt. As the story goes, her response to being told her starving peasant subjects had no bread was, “Qu’ils mangent de la brioche,” or “Let them eat cake.” The Queen lost her head at the guillotine.

There are many examples throughout history of governments losing power when their people went hungry. In the US, one of the reasons the Confederacy broke apart during the Civil War was the bread riots in April 1863 when the South ran out of food and bread. Since wheat is the primary ingredient in bread, it has a long history as a political commodity. Long before crude oil powered our planet, bread powered our lives with nutrition.

In 2020, Russia was the world’s leading exporting nation. The exports for the 2020/2021 season were around the 39-million-ton level. The United States was second, exporting roughly 27 million tons, followed by the European Union with 25.5 million tons of exports.

As the Russian government realized that its power depends on feeding the population, it made significant strides to become one of the leaders producing nations. Improvements in agricultural technology increased crop yields. Building ports and other logistics infrastructure created the opportunity to export the wheat not required for domestic consumption.

Today, Russia is third in wheat output behind China and India. 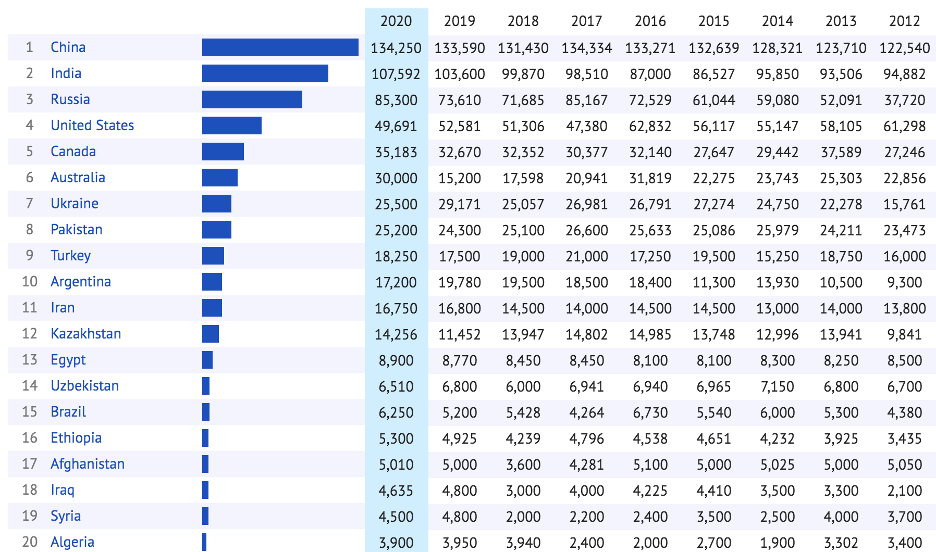 China and India’s populations are around the 1.4 billion level. The Russian population stands at around 145 million. The Russians produce more than half the levels of China and India, with approximately one-tenth the population. Therefore, the Russians have plenty of spare wheat to share with the world each year. President Putin understands the power that comes with being the leading exporter of the world’s most political commodity. If crude oil is second, he is also on the front lines supplying the world with the energy commodity.

Relations between the US and Russia remain strained. President Biden called Russian President Putin a “killer” and blamed him for interference in US elections. Meanwhile, President Putin has positioned himself as a central and controlling figure in the two most political commodities, wheat and crude oil.

In crude oil, Russia became a crucial cog in OPEC back in 2016. When oil dropped in early 2016, the Russian injected themselves into OPEC. As an ally with Iran in Syria, President Putin saw an opportunity to expand Russia’s sphere of influence in the Middle East as Saudi Arabia, Iran’s mortal enemy in the region, and the Saudis needed to fund common ground within OPEC. Acting as a bridge between the two enemies, Russian oil minister Alexander Novak cooperated on production policy to challenge the growing US power in the global petroleum market. While Russia and OPEC suffered as US shale output grew, the cooperation increased Russia’s profile within the cartel. The 2020 election changed US energy policy as President Biden pledged to address climate change by limiting US fossil fuel output via increased regulations. On his first day in office, the US leader canceled the Keystone XL pipeline project. More regulations that will decrease production are on the horizon. US daily production has declined from a record 13.1 million barrels per day to 10.9 mbpd in late April.

Meanwhile, as US output drops, OPEC’s influence in the petroleum market has experienced a resurgence. With the Russians involved in every aspect of production policy, they are now able to control the oil market over the coming years.

At the same time, the world’s leading wheat exporter, Russia, is now positioned to control another of the world’s most political commodities, the primary ingredient in bread. Tense US-Russian relations only increase President Putin’s desire for control and to achieve a competitive advantage over the US in world markets. With Russian influence in markets that supply the world’s energy and food, President Putin’s power and influence have increased substantially. With his hands on the wheels of the wheat and crude oil markets, the higher prices rise, the more power he can command.

A multi-year high in the global wheat benchmark futures contract

In April, all grain prices soared, and wheat was no exception. The CBOT soft red winter wheat futures market is the benchmark for global wheat prices. Over the past week, the price exploded to a new and higher high.

The monthly chart illustrates the rise to $7.73 per bushel, the highest price since February 2013. Wheat for nearby delivery was trading at over the $7.60 level at the end of last week.

While other grains and oilseed markets are in steep backwardations with nearby futures trading at a considerable premium to the new crop contracts and prices further out along the forward curve, the wheat market’s forward curve is relatively flat out to March 2022.

The forward curve shows no significant discount for deferred wheat out over the next year, reflecting the market’s expectations that the price will remain strong for the foreseeable future.

The Russian dominance in the international wheat arena translates to the power to influence prices. An export ban, export tariffs, or other tools could send prices skyrocketing as Russia produces the swing bushels of world wheat that will determine market equilibrium or shortages.

Wheat has been the most political commodity for centuries, and its price and supplies will continue to be a complex geopolitical maze in 2021.

The weather across China, India, Russia, the US, and the European Union, as well as in Canada, Australia, and other wheat-producing countries, will determine the grain’s price path. Drought conditions in any of the areas could create shortages. We are already at sky-high prices in early May, and the path of least resistance remains higher.

The most direct route for a risk position in wheat is via the futures and futures options that trade on the CME’s CBOT division. The Teucrium Wheat ETF product () provides an alternative to the futures arena. The fund summary and top holdings of WEAT include: 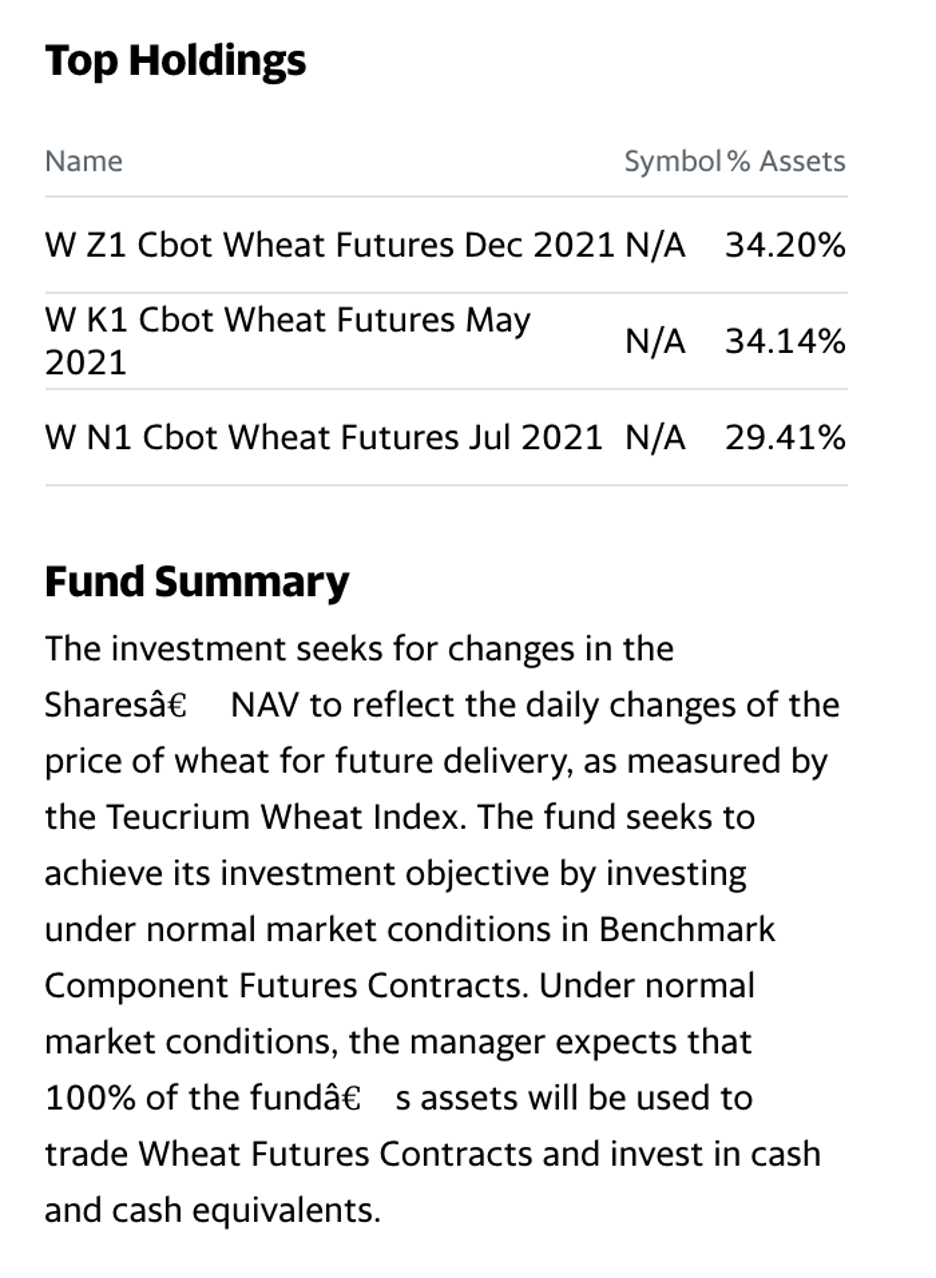 The chart shows that WEAT holds three CBOT wheat futures contracts that minimize the impact of risks of rolling from one month to the next. WEAT has $95.864 million in assets under management. The ETF trades an average of 541,835 shares each day. Barchart estimates the current management fee at 3.14%. 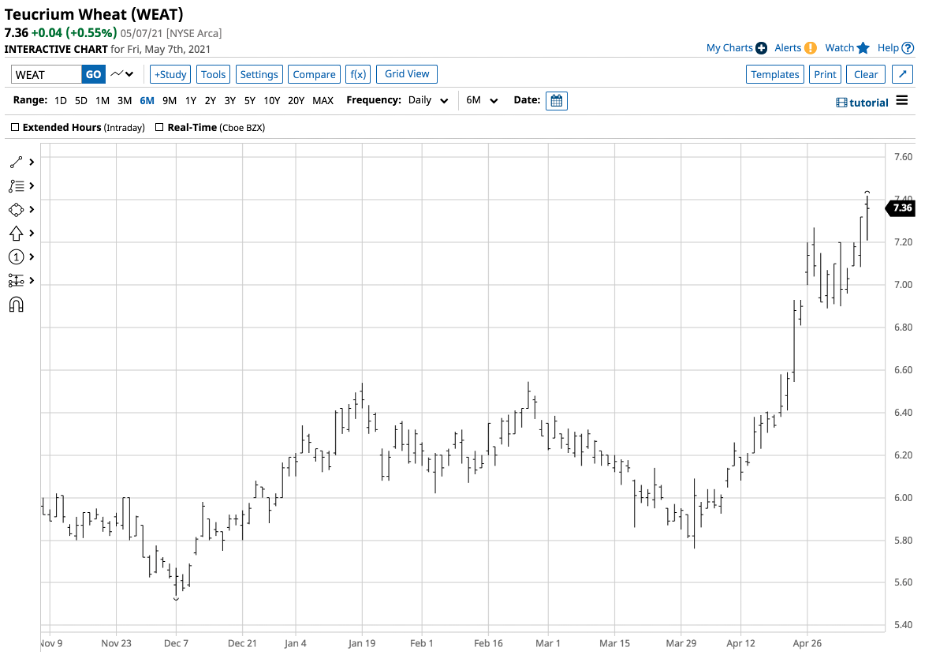 Since the Mar. 31 low, the WEAT ETF product rose from $5.76 to $7.42 per share or 28.8%. The management fee and blend of three contracts likely accounted for the ETF’s slight underperformance, but WEAT does an overall excellent job tracking the price of CBOT wheat futures.

Wheat is the world’s most political commodity. As the price rises, the primary ingredient in bread is likely to take on an increasing role in the geopolitical landscape.