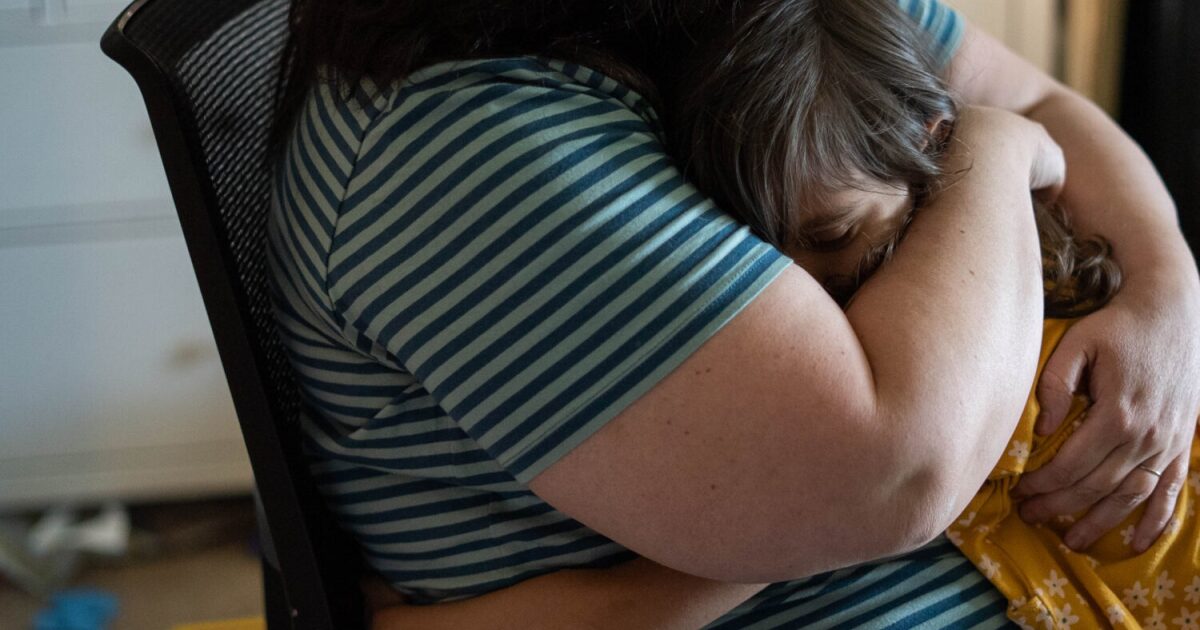 Susan and Brian’s home in Austin is any kid’s dream come true. It’s teeming with toys, action figures and books.

Many of the items in the couple’s home are from the 25 years Susan has lived in Austin. Graphic novels in the bookcase are from a comic book store in their old neighborhood. There are posters in the living room from a defunct video store, where Susan used to work. The library of more than 2,000 vinyl records holds memories of her favorite independent store in South Austin.

But in the current political climate, she sees no option but to give up this home and her long history in Austin.

Susan and Brian are parents of 5-year-old twins, including a transgender girl. (Sources in this story have requested we only use their first names, due to fears of being reported to state authorities and online harassment.) Over the past few years, they have been affirming their daughter’s slow steps toward socially transitioning — growing out her hair, changing her pronouns and going by a feminine version of her birth name.

They are among the Texas families with a trans child who are planning to leave Texas, after recent actions from top state leaders. Susan and Brian are now looking for jobs in states with strong civil rights protections for trans people.

Two months ago, Gov. Greg Abbott called for investigations into the parents of transgender children. It was backed by a non-binding legal opinion from Attorney General Ken Paxton arguing that parents are child abusers if they allow their kids to access treatments like puberty blockers or hormone therapy. This legal argument came despite near consensusamong major medical organizationsthat such interventions are within the standards of care.

Susan is worried a complaint could be filed against her even though her daughter isn’t old enough for puberty blockers. Like many Texas families with a transgender child, she’s formulated an emergency escape plan in preparation for the worst.

“Maybe my daughter and I might need to get on a Greyhound bus that night and just go directly to the nearest safe state,” Susan said. “My husband and my son can follow after us after they maybe tried to pack up some of our things.”

This heightened state of stress has plagued Susan for more than a year. It began last spring during the legislative session, during which several bills sought to label gender-affirming care as child abuse.

Susan imagined getting a knock on the door from child protective services. She feared her kids would be ripped away from her and end up in the foster care system. She worried about the future, and whether her daughter could be denied access to gender-affirming care she might need down the line.

Those measures ultimately failed. But in February, after Paxton released his opinion, Abbott directed the Department of Family Protective Services to investigate complaints of such care being offered to children. Soon after, Texas Children’s Hospital stopped providing hormone therapy to kids in its care. And although an injunction has now put those DFPS cases on hold, Susan believes efforts to target families of transgender children are not going away — especially as the issue gains traction in Republican-controlled state houses around the country.

“I just can’t picture a situation in which this doesn’t get worse,” Susan said. “And even if it’s exactly the way it’s been for the last year, I can’t live like this.”

Susan and Brian are preparing to say goodbye to Austin. She’s heartbroken to leave her sister — who they refer to as the “third parent” of the family — as well as the kids’ grandparents.

“It never crossed my mind that we would go anywhere else (but Austin), but I can’t do that anymore,” Susan said. “I can’t think ahead to a time when my kids are older. I can’t imagine buying a home. I don’t even feel comfortable taking a job that’s tied to this city. It’s not tolerable to picture ourselves here anymore.”

Shelly Skeen, senior attorney at Lambda Legal, said they’re not the only ones leaving Texas. The LGBTQ civil rights nonprofit has helped about 50 families in recent months.

“I really can’t think of any parent that I’ve talked to that hasn’t considered this,” Skeen said.

Not every family has the means to move out of state. According to Skeen, some are moving to other parts of the state where district attorneys have pledged not to prosecute these kinds of child abuse cases.

“If they have a business or they have kids in school, moving from Hidalgo County to Travis County and trying to find an apartment in Travis County, that takes a pretty big toll on a family,” Skeen said.

Rachel, a mother of three, feels her family is lucky to have made it out to Colorado. She has a nonbinary child, as well as a transgender teenager on hormone therapy — the exact treatment Texas is targeting.

The family had been scouting potential destinations since October. The passage of a bill banning trans kids from playing on sports teams that match their gender identity signaled to her that her kids weren’t safe in Texas.

“All the time, I’m nervous for my kids,” Rachel said. “I worry about them in ways I never used to. When we travel, I’m like, ‘I just need you all to go to the bathroom together.’ They’re very responsible, but it’s just that added layer of protection so I know they’re safe. I walk around with that (worry) all the time.”

But when the governor’s directive came down in February, it dawned on her that the need to move was now urgent.

Rachel moved out all of their belongings and got a few repairs done. Her house sold after just a few days on the market. Two weeks ago, she left Texas with the kids, but there’s been no instant sigh of relief.

“I definitely don’t feel like I’m on the other side of it,” Rachel said. “I wish.”

The family is staying with relatives until they find permanent housing. Rachel’s husband, who works in information technology, is still back in North Texas.

Rachel’s paranoia is balanced by outward signs of acceptance she’s seen in her new area. Her kids have seen pride flags flying in their neighborhood. The schools she’s considering have accessible bathrooms and sports teams for her kids.

She’s hopeful that her children now have a real shot at happy and healthy lives.

“I’ve just really tried to stay focused on the fact we’re making positive changes,” Rachel said, “and not just running away from things.”