Somalia is facing another food crisis: here’s why — and what can be done to stop the cycle

A soldier looking over a maize field where Somali farmers are tending a crop in Dollow, northern Somalia. TONY KARUMBA/AFP/GettyImagesSince the fall of Siad Barre’s regime in 1991, which led to a prolonged period of civil unrest, Somalia has been in a near-constant state of food insecurity. It also suffered two famines – in 1992 and 2011.

Every year, between April and May (when food is planted and not harvested), aid agencies make dire predictions about the impending doom of the upcoming growing season and to appeal for funds to support increased food aid.

This year, Save the Children announced that millions of Somalis won’t have enough food to eat as crop and vegetable production is expected to drop by 75%-80%. And the UN’s 2021 Somalia Humanitarian Response Plan seeks US$1.09 billion to provide “life-saving assistance” across Somalia.

As agricultural experts working in Somalia for the last 35 years we have done extensive research into food production. We have been involved in developing agricultural policies aimed at finding solutions to the country’s stagnant cereal production with an eye on reducing food insecurity in the country.

As part of our work we investigated historic trends over the last 60 years in domestic cereal production, cereal imports, and food aid in Somalia. We found that there’s been a precipitous decrease in the production of key cereals – maize and sorghum – over time, falling from a high of 91 kg per capita in 1972 to just 30 kg per capita in 2012. This is due to a combination of stagnant crop production and a rapidly increasing population. Conflict, corruption and bad governance have made matters worse.

Once almost cereal independent, the production decline has created a dependence on food aid and imports – over 50% cereal consumed is imported. This is hugely problematic: a majority of Somalis live below the poverty level and cannot afford to pay for food and relying on imports leaves them vulnerable to markets.

In practical terms this means many farmers could increase production, if there was increased incentive to do so. Currently, food aid and imports can stifle domestic production because farmers have little incentive to put in the extra effort to produce more than that which they consume.

Sorghum and maize are the predominant cereal crops grown in Somalia and historically, these two crops have provided a sizeable portion of total caloric intake of the Somali diet. Livestock is also a key local consumption commodity for household food security.

Sorghum production is mainly done by smallholder farmers and is carried out in dryland areas. Sorghum is more drought tolerant than maize and is grown predominantly in the Bay Region, south-central Somalia between the Juba and Shebelle rivers, Somalia’s largest rivers.

Maize is typically grown on irrigated land, often by small- and medium-sized farmers. These landholders often employ family labour to manage their land. The major maize growing areas are along the Shebelle and Juba rivers.

There are a few factors that have contributed to this.

Average yields are low because farmers typically don’t have access to the necessary agricultural inputs, for example, quality seeds and fertiliser. They also lack access to farm machinery, such as planters, fertiliser applicators, sprayers and harvesting equipment. In addition, there are no research and extension services in the country to help farmers make an informed decision.

Food shortages can also be due to the weather, such as flooding or drought. Higher frequencies and severity of drought events observed in recent years could make things worse.

Because the Shebelle and Juba rivers originate in high rainfall areas of Ethiopia, rains there can cause subsequent flooding in Somalia while drought conditions exist during the same growing season.

Another major reason for food insecurity in the country remains conflict, corruption and bad governance.

Civil unrest, since the early 1990s, is directly related to a deterioration of irrigation infrastructure. It has reduced the access that farmers may have to markets and the country lacks an agricultural regulatory framework, affecting food production and marketing.

The unrest has also resulted in the displacement of many farmers – there are about to 2.6 million internally displaced people in Somalia. This reduces the harvest of both crops.

In addition, illegal taxation on agricultural produce while it’s being transported to market is commonplace, both by government officials and rebel groups. This acts as a disincentive to farmers to produce crops.

The fact that Somalia has not improved crop production has led to food insecurity. There are a few things that can be done to change this.

First, Somalia should improve the way in which production data are reported. Somalia has two growing seasons each year: the Gu from April through May and the shorter Deyr from October into November. However, data is reported annually. This gives an incomplete view of how drastically different the seasons can be and causes confusion on production area data.

It’s also imperative that production and reliability increases. This can be done by adopting relatively simple agricultural management techniques that have been well-researched and recognised as important yield factors in sub-Saharan Africa.

For example, the country could:

In terms of political instability, unfortunately current tensions prevent policymakers from focusing on issues of food security. This is a big hurdle that needs to be overcome.

But there are steps policymakers can still take to move Somalia from emergency or humanitarian aid towards development aid. This would provide much-needed jobs, particularly for the youth (almost 70% of the population) – and strengthen the agricultural sector to help enable Somalia to be more food secure.

In 1991, Hossein Farzin published an article titled “Food Aid: Positive or Negative Economic Effects in Somalis?”. It would seem now – 30 years later – we should have a better answer to that question.

Drs. Hussein Haji and Paul Porter helped create the Somali Agricultural Technology Group (SATG) in 2001. SATG is a Somalia-based NGO (www.satg.org) that has received grants from a number of aid agencies (including USAID, FAO, DFID, ICRC and the EU) to implement agricultural development projects throughout Somalia. SATG is apolitical, but does work with Federal and State agencies on agricultural-related policy development and training. In 2016, they started Filsan, a private commercial seed company with headquarters in Mogadishu. Dr. Haji is the executive director of SATG and president of Filsan. Dr. Porter is a SATG board member and professor emeritus in agronomy at the University of Minnesota. Ryan Gavin is a graduate student at the University of Minnesota.

Hussein Haji, Ph.D., has served for over ten years with the Ministry of Agriculture in Somalia. He worked as a Senior Researcher and a lecturer of Genetics and Plant Breeding at the Somali National University. He has also served as the coordinator of the national sorghum improvement program and a director of the Central Agriculture Research Station (CARS) based in Afgoi. He traveled to Canada in 1990 where he obtained his M.Sc. and Ph.D. in Genetics and Plant Breeding at the University of Guelph. Soon after his graduation, he joined Agriculture and Agri-food Canada, where he served for 10 years as a lead scientist in the tobacco breeding and biotechnology department. During his service, he developed both open-pollinated as well as hybrid varieties using state-of-the-art technologies. While working with Agriculture Canada, Dr. Haji joined other agriculture professionals in founding the Somali Agricultural Technical Group (SATG) with the mission to bring peace and prosperity through sustainable agriculture development (www.satg.org).

Dr. Haji is also the founder of Filsan Inc (www.filsansomalia.org). which is a private company engaged in introducing new innovative agriculture technologies with the vision to translate science into action.

Ryan Gavin has consulted with SATG in the past, but at the time of this writing, has no active commitments or engagements with the organization. 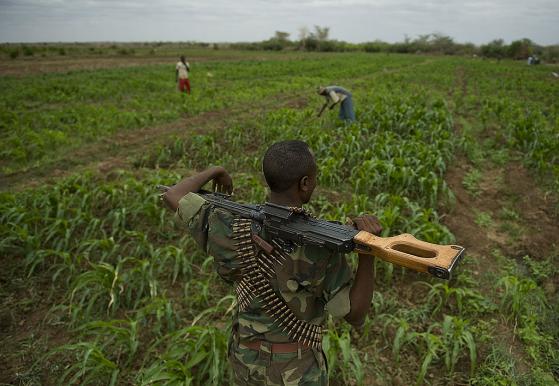