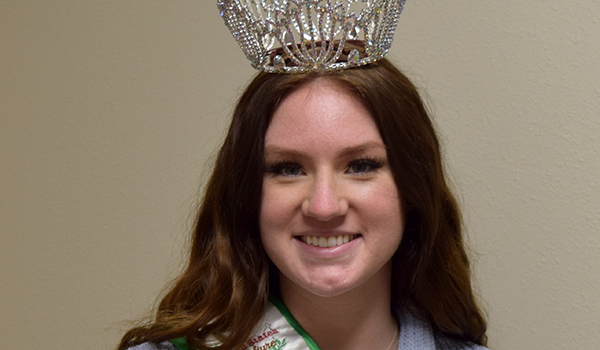 DOWAGIAC — Southwestern Michigan College freshman Aubrey Allen is passionate about agriculture as she embarks on her reign as 2021 Michigan Miss United States Agriculture. She will compete nationally next June in Florida.

Besides vice president of the SMC agriculture club and working part-time at Tractor Supply Co., she plans to show a draft horse at next year’s county fair and expected to compete in parliamentary procedure at the 93rd National FFA Convention and Expo Oct. 28-31 in Indianapolis until it became a virtual event.

“(Michigan Miss United States Agriculture) was online about a month ago, but I just found out I won two weeks ago,” Allen said. “I will mainly be advocating for agriculture, going to business openings, touring farms, using social media and choosing platforms within the industry. We have sponsors, like other pageants, and we have People’s Choice as well,” with dollar votes supporting scholarships.

Allen will create a resume with points she amasses advocating and volunteering. She accumulated more than 2,000 volunteer hours in high school, from managing the football team to FFA and pageantry. She belonged to the National Honor Society, served as secretary of the class advisory board and participated in her school’s peer-to-peer program.

“You mentor middle school or older kids. It’s like a buddy system, basically,” she said. “We hung out with them during the school day for an hour, four days a week. It’s basically just providing a good example and giving them something fun to do.”

A couple of factors influenced her to start at SMC before attempting East Lansing.

“I wasn’t dual enrolled, so I had no idea what college would be like. Staying here for two years saves me half the cost and gives me an opportunity to work,” Allen said.

Though she did not grow up on a farm, her middle school interest in animals led her to enroll in an elective agriscience class.

“I didn’t know the ins and outs of being a veterinarian,” she said. “I wouldn’t be able to do surgery on animals or people. It makes me squeamish.” But Allen’s freshman year coincided with Niles rechartering its FFA chapter with the 2016 arrival of Carrie George, who had been Cassopolis agriscience teacher since 1999.

Though Allen became increasingly involved in FFA, including parliamentary procedure throughout (third in the state freshman and junior years and first senior year), sophomore year she still considered becoming an athletic trainer her career path.

“I’m looking to be an animal sales representative,” Allen said. “Going into agriculture as a job wasn’t my first thought, but as my FFA advisers showed me different options, I realized how much I cared about the industry and how much I enjoy working in it. With a communications degree you can do so many different things. I haven’t decided, but after I get my bachelor’s, I could go to law school at Michigan State and represent companies in lawsuits or mediate land deals.”

“I’m a consumer mainly. I see what consumers need,” she said. “But as I get education and experience, I know how it works. Consumers normally have no idea how it works, and producers don’t really know how consumers feel most of the time.”

Her interests encompass writing — a handy hobby for the biography portion of the pageant — baking and public speaking. She loves the beach, especially Warren Dunes State Park on Lake Michigan.

“I tend to be a very busy person with the heavy schedule I have,” Allen said. “It has taught me to be well-organized and efficient. I love writing. I looked into journalism and agricultural media. I write novels and hope to have one published at some point in my life. I like to bake bread, but I’m not very good at it, so mainly sweets — cupcakes, brownies, cookies — when I take a break.”