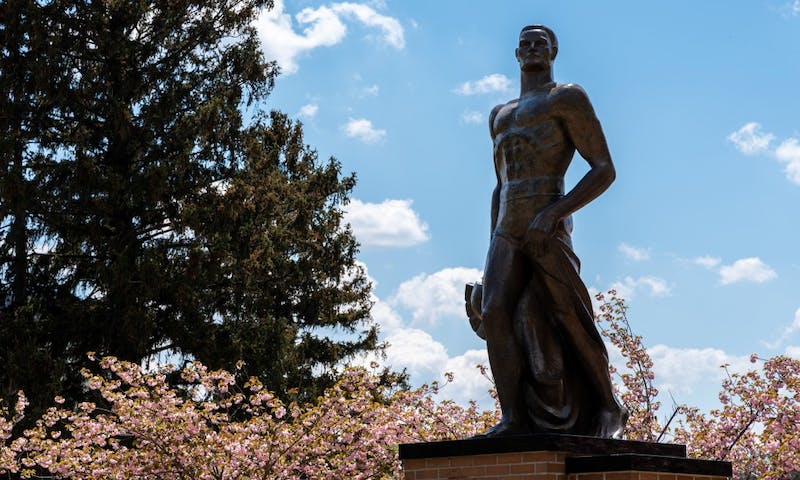 AAAS is the world’s largest general scientific society and being recognized by it is one of the most prestigious distinctions in science. They are revered scientists, engineers and innovators who have been recognized for their contributions across disciplines.

The nine MSU researchers span across multiple disciplines, but each has made significant contributions to their fields.

Associate professor emeritus Mark Urban-Lurain was named as a fellow in education.

“I’m thrilled and I’m honored to have been selected and elected by my peers and my colleagues. You’re nominated and elected by peers in your area. To have AAAS recognize my work is probably one of the highest honors I’ve received in my entire career so, I was very pleased to have them select me.”

While at MSU, Urban-Lurain taught introductory computer science courses for non-computer science majors for many years before he moved into research around STEM education.

Although multiple choice assessments are the easiest way to gauge student learning in large classes, they are not as representative of scientific knowledge, according to Urban-Lurain. To solve this, he is developing technology that will allow professors to ask open-ended questions, that will then be analyzed by a software that can provide an estimate on how well students understood the information.

Improving STEM education in such ways will advance science as a whole, Urban-Lurain said. As he moves forward in his research, he hopes to help prepare STEM researchers for a career in teaching.

Professor in the Department of Plant, Soil and Microbial Sciences Eunice F. Foster was named as a fellow in agricultural, food and renewable resources for her contributions to the field of agronomy, with reference to advancing diversity and educating the next generation of agricultural scientists.

“It is a great honor. It was unexpected. It means maybe an additional platform to let people know the importance of these disciplines,” Foster said.

In 1986, Foster worked with a student and helped form an organization called Minorities in Agriculture, Natural Resources and Related Sciences. She went on to serve as the first president and on the leadership team for 10 years.

Today, the organization has 65 chapters in 35 states, and Foster continues to be heavily involved.

Upon the completion of Foster’s research into drought resistance and nitrogen utilization, she could have chosen to retire. But instead, she chose to research a new discipline — how the university can recruit, nurture and diversify the agricultural student population.

“The one word that I tried to get out to everybody is that we’re stem and that we are essential, and most people don’t know that. We also need to diversify our student population, our faculty population, our staff population, so that we utilize all the human resources that God has given us,” Foster said.

Professor in the Department of Chemistry Robert E. Maleczka Jr. was named for a fellow in chemistry for his contributions to the field of synthetic chemistry.

Maleczka researches synthetic organic chemistry with the overarching theme of green chemistry — the development of chemical reactions and processes that reduce or eliminate the use and generation of hazardous products.

“When you look at my being elected, as well as the fact that I’m joining others who were previously elected, it speaks to the fact that there’s a lot of really superb science happening in the Chemistry Building and that MSU definitely holds its own when it comes to scientific excellence,” Maleczka said.

Professor in the Department of Physics and Facility for Rare Isotope Beams, or FRIB, Theory Alliance Managing Director Filomena Nunes was named a fellow in physics for distinguished leadership, teaching, mentoring and community service, within and outside the field of physics.

“I was honored by this, but at the same time, I have to say that it’s not the awards that keep me ticking,” Nunes said. “So, it’s great to be nominated for something like that and I’m very appreciative of my colleagues that chose to spend time writing letters for me to do this, but at the end of the day, I think what really matters for me is the work that gets done.”

Nunes started at MSU as an assistant professor and worked her way up to a senior member of the faculty at FRIB and the Physics Department. Additionally, she leads the FRIB Theory Alliance, a national organization that works closely with the Facility for Rare Isotope Beams.

In the male-dominated field of physics, Nunes was the first woman hired into the laboratory as faculty.

“The numbers are still very far from being equitable, from being balanced,” Nunes said. “So, there’s always been sort of a need to increase awareness towards issues related to that.”

To help create a more diverse physics community, Nunes has been involved in and has introduced programs to help bring non-cisgender male professionals into the field.

As for research, she works in the field of nuclear reactions, developing reaction models that allow researchers and scientists to interpret the properties of rare isotopes.

Jones is currently going towards phased retirement but says that he has enjoyed his time at MSU.

In his free time, Jones serves as the Director of the Mass Spectrometry and Metabolomics Core, an MSU laboratory that analyzes molecules. He also holds the position of Associate Director at the MSU Center for PFAS Research, a hub for communicating and mitigating PFAS risks.

His research covers a wide range of topics, but mainly focuses on how plants produce chemicals. He is involved in a multi-investigator team that seeks to better comprehend these chemicals, studying how they are created and what they are composed of.

Unrelated to his plant research, Jones also studies the exposome — the analysis of how exposure of all kinds affects one’s health throughout their life cycle. He is working on a United Kingdom study named the Isle of Wight Birth Cohort, where researchers measure different chemicals in the blood from gestation and birth and then correlate these findings with the health of the children. The study is currently on its third generation.

“I think it’s a wonderful recognition that someone thought enough of me to nominate me for this honor,” Jones said. “This is something that you don’t go out and seek on your own. It’s rewarding to know that the people that I’ve worked with and the people that I’ve associated with thought that my contributions were worthy of this honor.”

MSU Foundation Professor in the Department of Earth and Environmental Science Bruno Basso was named a fellow in agriculture, food and renewable resources for his contributions to the field of agronomy.

Basso considers himself a true Spartan, as he earned his PhD at MSU. In addition to teaching at the university, he is a researcher at W.K. Kellogg Biological Center.

He conducts research in digital agriculture, crop modeling and sustainability. Basso studies the use of drones and other types of images to understand the health of plants by integrating the images with a computer simulation model that identifies the factors of plant health.

He says that one of the most critical parts of his research is trying to combine profitability for the farmers and environmental impact reduction.

“It’s (being named a fellow) just an incredible milestone in a career,” Basso said. “It’s one of the most prestigious awards that scientists can receive in formal recognition. So, being recognized with this award is something that you would dream of, but it’s not an end point for me. It’s the beginning of something even newer and more challenging to continue to do well.”

Dean of the MSU College of Engineering Leo Charles Kempel was named a fellow in engineering for his contributions to magneto-dielectric materials for radio frequency applications and for his excellence in leadership in engineering.

Kempel joined the MSU Department of Electrical and Computer Engineering as an assistant professor in 1998. At MSU, he has encountered a multitude of opportunities, such as founding the High Performance Computing Center.

He researches in applied electromagnetics, which looks at the underlying technologies that make things such as wireless communications and sensors work.

“Being a fellow is really gratifying for a faculty member,” Kempel said. “The reason is that the election of a fellow is done by peers. It’s your peers have said that they recognize that you’ve had an impact and that you’re a person who is in some sense being a leader in your field.”

MSU Foundation Professor in the Department of Statistics and Probability Tapabrata “Taps” Maiti was named a fellow in statistics for his contributions to the fields of statistics and data science.

Maiti started at MSU in 2008. He is currently a professor and graduate director in the MSU Department of Statistics and Probability. He also holds joint appointment with the MSU Department of Marketing and serves as the Co-director for the Center for Business and Social Analytics at Eli Broad College of Business.

He is active outside of MSU as well, belonging to multiple associations such as the American Statistical Organization and the editorial boards for multiple prestigious journals.

Although statistics and data science is his main research area, Maiti is highly involved with interdisciplinary research, collaborating with a wide variety of researchers from biomedical engineers to research of social science. His research has been supported by federal funding and he has collaborated with government and national organizations.

“This means to me, encourages me to do more work which will be useful for science and society in general,” Maiti said. “And of course, I’d like to thank my students, my colleagues, being so supportive. Without them, this would not have been possible.”

Professor in the Department of Computer Science and Engineering Charles Ofria was named as a fellow in biological sciences for his work in understanding how evolution functions and for the application of that knowledge to digital organisms. He was also named for his leadership roles in the computational evolution community.

At MSU, he is the Director of the Beacon Center, a National Science Foundation Science and Technology Center stationed at Michigan State University. The center brings scientists together to study evolution as it happens and apply it to solve real world problems.

“One of the interesting things is I got inducted into the biological section for the AAAS and that’s rare for a computer scientist to do,” Ofria said. “It has to do with the fact that my research makes impacts in both computer science and biology.”