I’ve Been Sleeping With An EMF-Blocking Stone For The Past 3 Months, How Are You? 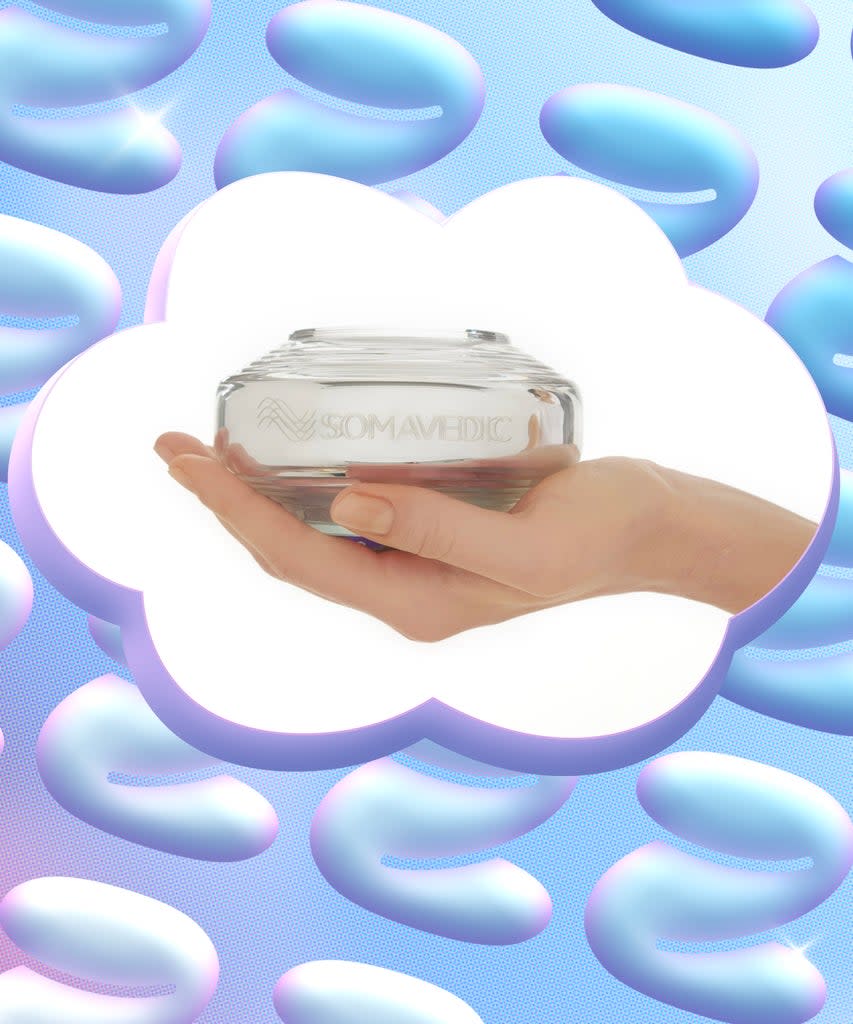 What’s the deal with sleep? [Doing my best Jerry Seinfeld here.] The kids don’t think they need it, the teens get too much of it, and the adults, well, we can’t seem to get enough of it. We’re living in a world where the only thing rivaling our burning desire to be constantly plugged in is the desperate need to unplug. It’s a tricky paradox because, as science-backed studies have indicated, a primary culprit of poor sleep is too much technology. More specifically, an over-abundance of electric and magnetic fields; also known as EMFs. This brings us to the solutions our sleep-obsessed society has concocted to combat the EMF background noise that can potentially impede a good night’s rest; ranging from the $0 act of maintaining a technology-free bedroom to a $500 semi-precious stone claiming to harmonize the energy inside your space. If you think the latter sounds like highfalutin’ snake oil, then I was right there with you. The suss device is called the Somavedic Harmony, and I, along with my deeply sleep-troubled partner, have been using it in our bedroom for the past three months to discern what effects (if any) it would have on our nighttime wellbeing. As a skeptic of shoppable sleep solutions living with an insomniac who will try anything to help him catch forty winks, this journey has been charged with intrigue, an appropriate amount of skepticism, and a LOT of obscure information.

But, before we get into all of the magic-stone-harmonizing stuff, let’s quickly run through EMFs and how they tie into sleep.

Short for electric and magnetic fields, EMFs are invisible energy waves (aka radiation) thought to be most commonly emitted through the use of electrical power sources. It sounds ominous but, in reality, is less so because not all EMFs are created equal. According to the National Institute of Environmental Health Sciences, there are two types of electric and magnetic fields: ionizing (high-level, potentially harmful radiation found in X-rays or UV-light) and non-ionizing (low-level, non-harmful radiation found in common household devices).

Think of it like this: the heavy apron the dentist sacks you with before an X-ray protects against harmful ionizing EMFs; the blue-light baths you take from your TVs, tablets, and phones are non-ionizing EMFs that, while harmless to your immediate health, are thought to negatively impact sleep. If you haven’t dozed off yet, then now we get into the good stuff: whether or not the $500 Somavedic stone positively impacted my (and my restless partner’s) sleep.

After spending considerable time attempting to discern what the heck this thing actually does, I landed on the brand’s “Science” page. From the word salad citing “independent lab testing,” I was able to pull out the following results: the “stone” carried positive effects on everything from cardiovascular to nervous-system health, heart rate variability, circulation, and internal balance — all of which, I presumed, correlate to sounder sleep. But what is the actual technology that achieves this? That question was somehow even trickier to answer. On the product page’s description, there’s a “How Somavedic works” section that states: “Somavedic is designed on the principle of controlled release of energy from precious and semi-precious stones, creating a coherent field covering more than 2,800+ square feet. Somavedic creates a coherent, life-supporting field, with the radius of 100 feet in all directions, penetrating floors and walls.” Wha? After spending extra time digging through the site’s “FAQ” and “About” pages, along with Googling the brand to see what the rest of the internet had to say, I’ve settled on a layman’s definition: it’s a device that’s been engineered by sciencey-techy people to emit some special type of energy waves that “neutralize” or “harmonize” the “negative” EMFs inside a space.

This most bemusing part of this “technology” is that it’s harnessed inside a little UFO-looking stone (said to be precious AND semi-precious) that’s then safely encapsulated in 100% handblown glass (oooh-aaah). There are three “Essential” models (the Harmony, SKY, and Vedic) and two “Premium” models (the Amber, and Somavedic Gold), which range in EMF-fighting capabilities and effective radius coverage — meaning the more EMFs you want to block and the bigger the space you want to cover, the pricier the stones get (we’re talking up to $5,600). I went with the Harmony: the most affordable of the magic stone models priced at mouth-drying $487. (For the purposes of this review, I was able to barter with the brand for a 12%-off exclusive discount using promo code REFINERY12 — hey, every little bit helps.)

The Somavedic Harmony is described as the “smaller variant of the powerful Somavedic Sky model.” Although it was specifically designed for portability and smaller spaces (like cars or offices), I decided to put the more palatably-priced stone to EMF-blocking use inside my normal-sized bedroom. It arrived in a minimalist but formidable white box (much like the ones new Apple products come in) accompanied by only a charger, several adapters, and two instruction pamphlets — which essentially told me to just plug the thing in and let it do its thing.

The answer to this question, as with most questions in life, is complicated. Let me begin with a bit of sleep background on me and my partner. I would describe myself as a sensitive sleeper; avoiding caffeine or food too close to bedtime and requiring at least eight hours in an environment that is cool, dark, and quiet. My partner, on the other hand, is a textbook troubled insomniac — he’s regularly restless, overheats easily, and suffers from night terrors plus bouts of sleepwalking. To combat these bedtime woes, he’s tried every sleep aid from CBD gummies to melatonin-magnesium pills and the harder doctor-prescribed stuff while also partaking in more science-backed practices such as stretching, breathing exercises, and eating at least three hours before turning in. In terms of EMF-emitting devices inside our bedroom: we have a TV and both sleep with our phones plugged in directly next to our heads on the nightstands. My partner is strict about phone use and blue light in bed, while I am known to doom-scroll myself to sleep.

To make this test all the more interesting, I did not tell my partner about the Harmony and plugged it in underneath my nightstand where he wouldn’t see it. It made no noise once it booted up, so the only way I could tell it was on and “working” was by its glow (pictured above), which I had to conceal — for both secretive purposes and my personal sleeping preferences — beneath a shoebox.

After suffering a particularly restless night prior to installing the device, our first sleep with the Somavedic Harmony was suspiciously restful. My partner and I conked out in a way we both described as “deep” the following morning. As I sipped my coffee the next day, I wondered to myself — with my partner none the wiser — was it our exhaustion that made the slumber so intense or the magic EMF-fighting stone hidden beneath my nightstand? After a week of keeping the stone parked next to my bed — and one or two restless evenings that I chalked up to too much caffeine — there was a strange almost heavy effect of sleepiness that weighed over me when I laid down each night. With every passing week, I noticed an overall downward trend in my partner needing to get up and switch bedrooms in the middle of the night (a tactic he employs to combat particularly bad bouts of restless legs). Perhaps this was because I felt more at rest and nagged him less when he started to toss and turn. Or, it could be because he was tossing and turning less. Was the stone magic working or was this a placebo effect?

Now, three months in, I often forget the Somavedic is there. Despite slacking off after the first month and not carefully tracking the soundness of my sleep, upon sitting down to write this review I realized that it doesn’t actually matter. So much of my sleep ability is rooted in my mindset. If I can’t shut off my mind, I can’t reach deep sleep. Whether or not Somavedic’s EMF-fighting technology is actually working to harmonize my sleep space or not, perhaps it “worked” by allowing my mind to loosen up enough that relaxation — and slumber — followed suit. However, is the promise of peace of mind worth close to $500? Given the foggy facts behind this device’s functionality and my own unscientific approach to testing it out, I’m not sure I would recommend it. But, after revealing its existence, my sleep-desperate partner would argue otherwise. He spent the better part of an evening Googling EMFs and Somavedic, which prompted a bedtime request to please remove the hidden Harmony stone from its shoebox and re-home it on his nightstand.

The question, therefore, seems less about whether or not the Somavedic worked — because I haven’t the faintest clue how anyone could definitively discern that — but instead is a matter of how much you’re willing to pay for some gosh darn shuteye. If a $500 EMF-blocking stone gives you peace of mind and a restful night’s sleep, then more power (and forty winks) to you.

At Refinery29, we’re here to help you navigate this overwhelming world of stuff. All of our market picks are independently selected and curated by the editorial team. All product details reflect the price and availability at the time of publication. If you buy or click on something we link to on our site, Refinery29 may earn commission.

Like what you see? How about some more R29 goodness, right here?

‘Fantastic Beasts 3’ titled ‘The Secrets of Dumbledore,’ set to release on April 15 in 2022

10 Books for Kids to Learn About Entrepreneurship and Financial Literacy

‘Fantastic Beasts 3’ titled ‘The Secrets of Dumbledore,’ set to release on April 15 in 2022