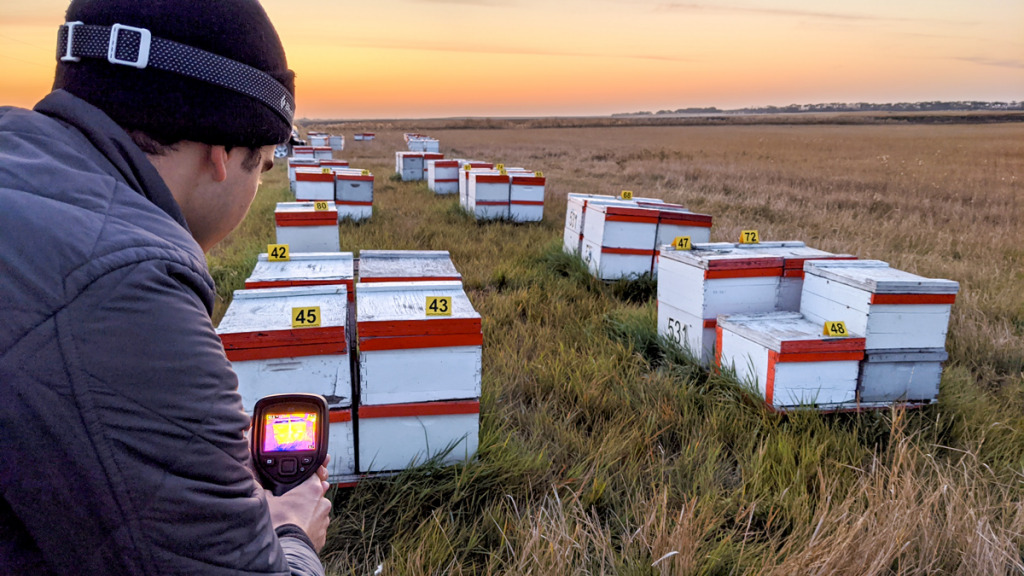 Almond growers use The Bee Corp.’s infrared technology to ensure they are paying a fair price to rent bees. (Photo courtesy of The Bee Corp.)

Ellie Symes, the co-founder and CEO of The Bee Corp., has been called a rising tech star, agriculture industry pioneer and role model for women in business.

But don’t call the 26-year-old the Queen Bee. That title, she said with a laugh, is reserved for singer and actress Beyonce.

Those who know Symes best say she’s much more of a worker bee with a knack for collaboration and an inexhaustible desire to grow her company. In 2018, she won the Rising Star Award at the Mira Awards, Indiana’s largest and longest-running technology awards program.

The agricultural technology company she co-founded with Wyatt Wells while she was an Indiana University student is creating quite a buzz, with a growth and diversification plan and a recent haul of capital to fuel its ambitious expansion plans.

The Bee Corp. has pioneered technology that can count the number of bees in a hive and monitor hive health, which is imperative for various crop growers globally.

So, growers rent beehives to ensure their plants grow and produce. Those growers pay for the hives based on how many bees are inside. But it’s not exactly easy to figure out how many bees are buzzing in and out of a hive.

An accurate count is The Bee Corp.’s mission.

During the pandemic, the 4-year-old company raised $1 million in capital, and now it’s diversifying and growing its customer base. The company has raised a total of $2.6 million.

The company in 2018 changed its primary target market from hobbyists to commercial growers and beekeepers. To do so, it changed the hardware and methodology it uses to monitor hives.

The Bee Corp. now offers a third-party appraisal tool, using infrared cameras to monitor the hive and the bees inside it and an internet of things platform to help growers stay apprised of hive conditions.

“It’s much more complex [than the company’s previous method], but it gives a more accurate count,” Symes said.

For decades, beehive inspectors have counted through human observation and estimated the number of bees in the hive for pricing. That is still the case in most places.

The problem, Symes said, is that estimating based on observation is “quite subjective. And it’s not very accurate.” In fact, studies show, the manual method produces the correct count less than half the time.

Agriculture experts say the industry is ripe for a technology based approach.

Enter The Bee Corp. and its Verifli system.

Verifli uses an infrared image to measure the thermal data inside a hive. The system then crunches the numbers, making adjustments based on real-time weather information.

The Bee Corp. is one of the few companies globally that is offering a technology driven method to counting bees in a hive and monitoring hive health.

“The Bee Corp has a compelling story. The company has a great management team, and Ellie is a dynamic leader,” said Tony Armstrong, CEO of IU Ventures.

Armstrong has known Symes since she started the Bee Keeping Club at IU in 2014—when she was still a student. That endeavor—with encouragement from IU Foundation and other IU officials—led to the launch of the company.

“This has been something she has been passionate about for some time,” Armstrong said.

Her strengths go beyond her passion for the business.

“She’s eager to learn, tremendously coachable and dogged about getting the help she needs to grow the company,” Armstrong said. “She has all the attributes you need to lead a company, which is really amazing for being so young.”

But it’s not just the IU folks who are impressed.

“Ellie Symes is an ambitious entrepreneur and an influential thought leader pioneering patented technologies and other innovative IoT solutions in an industry devoid of tech adoption,” said Mike Langellier, CEO of TechPoint, a local tech advocacy group and accelerator.

Ironically, Symes is allergic to bee stings. She has been stung a few times while working with bees and often carries an EpiPen with her in case she needs to counteract an allergic reaction. But these days, she spends most of her time running the company. She’s far less likely to be working around the buzzing hives, which are usually encased in wooden boxes slightly larger than a standard wood crate.

Since 2018, The Bee Corp has more than doubled its work force. It now has eight full-time and six part-time employees, and Symes said the company is looking to add more employees in tech and sales—with a little heavier emphasis on the sales side.

Symes told IBJ the firm has plenty of room to grow at its headquarters at The Union 525 Building in downtown Indianapolis.

Armstrong said the firm is likely to need a lot more space.

“This could be a company that could really take off as they find new opportunities,” Armstrong said. “The Bee Corp.’s technology could be a platform for other types of monitoring. I wouldn’t be surprised if this company under Ellie has hundreds of employees as growers and other people learn more about this technology.”

To date, The Bee Corp. has been focused solely on serving almond growers. But that’s about to change.

The Bee Corp. is preparing to branch into other crops, Symes said.

“We have a large global market and we’re excited about some of the pilots we have in place to expand,” Symes said. “We’re demonstrating our technology for various growers and learning from growers how our technology is helpful and what might need to change.”

The company is not yet profitable, Symes said, but year-over-year revenue is increasing. Symes declined to say how much money the company is bringing in.

Symes, who has an undergraduate degree in environmental management and a master’s in public affairs and information systems from IU, has proven to be adept at raising capital.

In 2016, the company took flight when its business plan won $100,000 in an on-campus competition for entrepreneurs.

Subsequently, The Bee Corp has received two Small Business Innovation Research grants from the National Science Foundation—a one-year, $225,000 Phase I grant and a two-year, $750,000 Phase II grant. Part of the process was to conduct 30 interviews with end users; Symes and Wells conducted more than 100.

IU has also supplied the company with a steady stream of support, both financial and advisory.

In April, the IU Philanthropic Venture Fund invested $250,000 in the company.

“They pursued beekeeping and solving problems for beekeepers out of passion,” said Samantha Ginther, IU Ventures senior associate. “Through strategic utilization of grant funding, they converted that concept into a well-researched product.”

Armstrong doesn’t think The Bee Corp. will have any problems raising the capital it will need.

“I think there’s a lot of interest from investors,” he said. “They have a great story and great platform to gather data—which has tremendous value for a number of potential applications—and they have great results to demonstrate that. Ellie does such a tremendous job of telling the story. I don’t think they’ll have any problem raising funds.”

“Aside from being a great investment opportunity to benefit the evergreen Philanthropic Venture Fund, The Bee Corp. represents a connection to the [agricultural technology] space,” she said. “Through this growth, we can develop IU Ventures’ relationships with other investors to benefit current and future portfolio companies.”•