In a recent interview, Megan Fox opened up about her engagement to Machine Gun Kelly and motherhood, sharing rare details about her three sons.

Fox has three kids, Noah, Bodhi and Journey with her ex-husband, Brian Austin Green and has spoken from time to time about how parenting has shaped her life.

Last year Fox talked about how becoming a mom helped her “find purpose in this horrendous, patriarchal, misogynistic hell that was Hollywood.”

Fox seems to enjoy being a mother to her three kids. However, there are boundaries and limits that she sets when it comes to parenting.

Here are some parenting rules Megan Fox has while raising her kids.

1. Megan Fox encourages her kids to express their gender identity however they want.

Fox has recently opened up about how she supports and lets her son, Noah wear dresses. In an interview with Glamour, she spoke about her son wanting to wear dresses.

She said, “Noah started wearing dresses when he was about two, and I bought a bunch of books that sort of addressed these things and addressed a full spectrum of what this is.”

She further mentioned how those books educated Noah about self-expression and the freedom to wear whatever one wished to wear.

In an interview with Instyle, she also mentioned that Noah has been bullied because he wears dresses. As a result, she keeps him away from the internet.

She said, “I don’t want him to ever have to read that sh-t because he hears it from little kids at his own school who are like, ‘Boys don’t wear dresses’.”

Everyone is aware of the harmful effects of technology and many parents limit their children from using it. However, Fox forbids her kids from using iPads or watching TV completely.

According to DailyMail, she mentioned that she doesn’t want technology to have any negative impacts on her kids’ brains.

“It’s hard to make them super-nerds if I don’t let them watch television or movies, or get on an iPhone or an iPad,” Fox said.

“So right now, I’m making my kids into artistic nature-hippies.”

3. Megan Fox lets her son grow out their hair.

In addition to letting her kids wear dresses, Fox also lets them have longer hair than is typical.

After Fox posted a picture on social media of her boys in long hair, she received a lot of backlash from internet users. Many people criticized her for letting her kids grow their hair out and called her out for being a bad parent.

One user commented, “It’s just that girls should look like that, girls! And boys like boys. That’s it and that’s that.”

However, there were also many others in support of the ‘Transformers’ actress claiming that she was just letting her kids be themselves.

One person wrote, “She posts a beautiful pic of her children … and the majority of you bring her down… People have really forgotten how to be nice. If you like it, Press the LIKE button. If you don’t, JUST KEEP SCROLLING. They are gorgeous kids,”

4. Megan Fox teaches her kids to be environmentally friendly.

She also revealed that she sends her kids to vegan-friendly schools where they are taught to plant and grow their food. Similarly, she teaches them to respect other animals and living things.

“We don’t step on ants; we don’t do things like that. We don’t rip flowers out of the ground, because we think they’re beautiful. I teach them that plants are sentient beings — they have feelings, thoughts, and emotions — so that’s what we’re doing.”

She even mentioned that when her son once stepped on a Roly Poly by mistake he was quite sad about it so, they even held a funeral for it.

Fox sends her kids to a vegan-friendly school and imposes similar healthy habits at home.

She mostly keeps clean and healthy foods at home with little to no junk food. She revealed that when she was married to Green, he barely had any junk food at home.

“He never gets to eat anything fun because my house is so clean and I make him eat really clean, too, so maybe I’ll get him a German chocolate cake or something,” Fox said.

“He’ll be so happy to see junk food.”

Machine Gun Kelly also spoke about how healthy Fox’s diet is. He said, “She eats super healthy so I mean everything is gluten-free and organic on her menu.”

6. She hired a night nurse for her kids.

When Noah was born, Fox initially didn’t hire any help. However, she realized that was a huge mistake.

In an interview with Mirror, she revealed how she struggled to take care of her baby and she would be exhausted all the time.

She mentioned how difficult it was to take care of a child as they need constant attention. It had become too much for her so, she decided she needed some help.

While Fox does post pictures of her kids on social media, she keeps it to a bare minimum.

She doesn’t want her kids to be on the internet and wishes to keep their moments private. In 2020, Fox called out her ex-husband on Instagram when he posted a picture of their kids.

While she didn’t like her sons being on social media, she also feared that this would make her the ‘absent mother’ as she didn’t share any pics on her feed.

“I know you love your kids. But I don’t know why you can’t stop using them to posture via social media,” Fox commented on the now-deleted photo.

“You’re so intoxicated with feeding the pervasive narrative that I’m an absent mother, and you are the perennial, eternally dedicated dad of the year.” 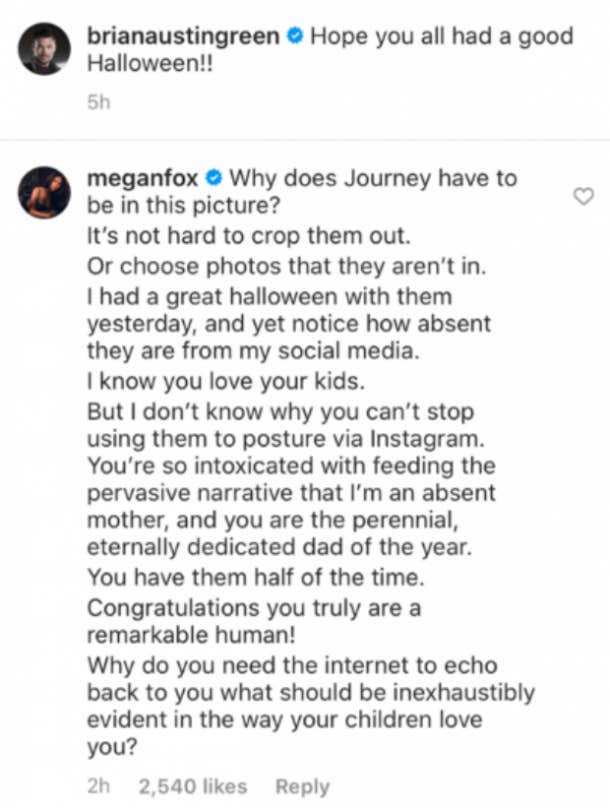 8. Megan Fox wants her kids to have a routine.

Being an actress, Fox has to travel around a lot. During those times, she doesn’t take her kids with her.

She wants her kids to have a stable routine every day and avoids bringing her kids with her when she is working.

She said, “I mean, we haven’t even driven to Vegas or flown to Vegas! We don’t do any of that. We don’t prioritize taking vacations together.”

She also opened up more recently about how she is questioned about her kids when she is seen without them.

She said, “I have to leave and sometimes I don’t want them photographed and they don’t come with me.”

She also stated that since she shares the custody of her kids with her ex-husband, they are with him half of the time.

9. Megan Fox puts her kids before her career.

Since she has had kids, Fox has been more selective of any acting roles she takes on. As a mother, she wants to set a good example for her kids.

As she has been sexualized on the screen from a young age, she wants to break out of that image. She said, “It changes your perspective about being overly sexual in a film when you have a baby.”

She further mentioned how she doesn’t want her kids to see her in a photoshoot or a movie that might be inappropriate for kids.

She said, “I don’t want [my kids] to see me, as a woman, play a character that’s degrading or being abused in a graphic way. I don’t think that’s something they’ll be able to process well. My particular kids [are] very sensitive.”

More for You on YourTango:

Get breaking news & relationship advice delivered to your inbox daily!