Thankfully for income investors, dividend raises occur on a fairly constant basis. But as with many things in this busy modern life of ours, they have a way of slipping out of our memory.

With that in mind, here are three recent dividend raises by well-established companies: Deere & Company (NYSE:DE), Illinois Tool Works (NYSE:ITW), and Verizon Communications (NYSE:VZ). We’re still some distance in front of the ex-dividend dates for these enhanced payouts, so there’s still time to buy into them before the clock runs out. Happy earning! 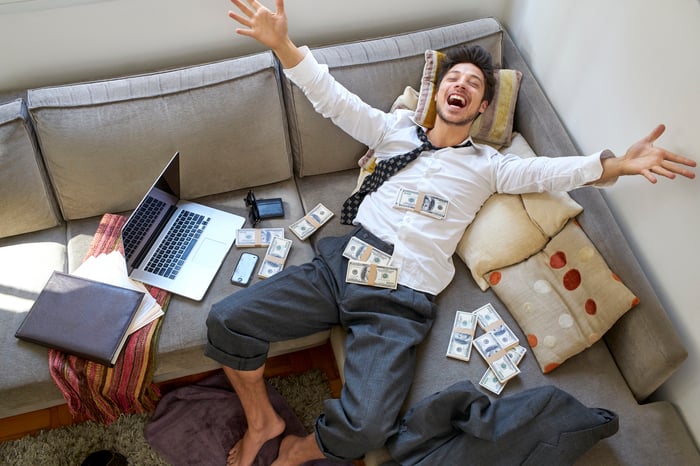 Fueled by higher commodity prices and, consequently, more capital in the agricultural sector, leading farm equipment specialist Deere & Company has been on a tear lately. Both revenue and profitability have climbed well higher in recent quarters; in its third quarter of fiscal 2021, for instance, Deere managed to grow revenue a very robust 29% year over year to $11.5 billion, while net income more than doubled to almost $1.7 billion.

That big tractor should keep motoring along. Deere believes demand will remain strong, not least because of continued take-up of advanced agricultural technologies. It’s guiding for net income of $5.7 billion to $5.9 billion this fiscal year, which — like the third-quarter result — would be over two times the 2020 figure ($2.75 billion).

Meanwhile, Deere has plenty of the green stuff in its coffers to fund the shareholder payout. The company’s free cash flow topped $1.9 billion in the third quarter. This was far more than enough to cover the $281 million in dividends it dispensed that quarter.

And clearly, it’s providing sufficient room for a raise. Last month, Deere declared that its upcoming quarterly dividend will be $1.05 per share, a sturdy 17% higher than before. This is to be paid on Nov. 8 to stockholders of record as of Sept. 30. At the most recent closing share price, it would yield just under 1.2%.

Although not as well known to the general public as Deere or Verizon, well-diversified manufacturing company Illinois Tool Works is the most reliable dividend raiser of our three companies. In fact, it’s a Dividend Aristocrat, one of the clutch of S&P 500 component stocks that has lifted its payout at least once per year for a minimum of 25 years running.

Following a challenging 2020 in which it was battered by (you guessed it) the pandemic, Illinois Tool Works has been doing much better lately. Each of its seven — yes, seven — business segments recorded double-digit sales growth in the company’s second quarter compared to the year-ago period. Overall, the company’s organic sales growth came in at a very high 37%. How’s that for recovery?

Illinois Tool Works doesn’t see this momentum slowing much. It raised its full-year guidance for GAAP net profit by 32% at the midpoint of its new $8.55 to $8.95 per share range. It also cranked up its forecast for organic sales growth, which should come in at 11% to 13%. No, that’s not the 37% of the second quarter, but it’s still an encouragingly high number for such an established, sprawling industrial business.

The company is walking the walk for its shareholders, too. This year’s model of its annual dividend raise is 7%, to a quarterly payout of $1.22 per share. This will first be paid on Oct. 14 to investors of record as of Sept. 30; the yield is 2.2%.

As a company with millions of customers who pay it on a regular basis, Verizon has a cash pile that is always comfortingly large. Therefore, it has enough in the tank to pay a high-yield dividend. Which is saying something, as it also has to spend the gobs of capital required of telecom incumbents to stay on the cutting edge of technology.

Given that the company is a top dog in its business and it has a massive user base that likely won’t expand much, it’s done a fine job improving both its top and bottom lines.

Second-quarter revenue increased by 11% year over year and GAAP net profit improved by 23%. The two line items were helped to no small degree by Verizon’s somewhat stealthy media unit, and the rollout of 5G service. With the vast potential of 5G in front of it, the company upped its guidance for annual growth both in wireless service revenue, its crucial segment, and adjusted per-share earnings.

While the company is doubtlessly concerned with those capital expenditures, it’s still keeping the faith with dividend raises. For the 15th year in a row, it declared one in early September, a modest bump of 2%. Verizon’s quarterly payout will be $0.64 per share, for a yield of 4.7%. This is to be paid on Nov. 1 to stockholders of record as of Oct. 8.

This article represents the opinion of the writer, who may disagree with the “official” recommendation position of a Motley Fool premium advisory service. We’re motley! Questioning an investing thesis — even one of our own — helps us all think critically about investing and make decisions that help us become smarter, happier, and richer.